After so many years and what feels like many more frustrations and false starts, I was ready to proclaim 2016 as the The Comeback Year. Going all in. No excuses. PR’s or PT, which is basically the runner’s equivalent of all or nothing. What better place to test this new mindset than Resolution Beach.

Well, Resolution Beach isn’t exactly a place, it’s more of an event (Resolution Beach 5k) that took place on lovely Scarborough Beach in RI on January 3rd. If 2016 really was going to be The Year, we were going to find about as quickly as possible if there was any chance of that coming to fruition.

After the latest setback (pelvic stress fracture in May of 2015), it took months to even get going again. Once I was cleared for running it seemed that a cautious approach would be best. 2015 was already shot so why try to force anything? Sure there was some racing, but mostly for beer. The fall and early winter were spent building up fairly slowly for a planned serious run at a spring marathon.

Once you stepped out of the comfort of your car on race day, it was clear that this was no day at the beach. The wind was something fierce; by my estimates it was 100 mph, but in reality it was a legit 40. Overall the conditions were not fast, with slick mud on the trail loop and a couple of spots in non-packed sand to go along with that ridiculous headwind on the beach (first & last half mile of the race).

After scouting the course I knew two things:

1.) Whatever place I was in going through the old church was what place I’d probably finish in, and

2.) I figured the leaders would be far enough ahead that I wouldn’t need to try anything stupid (i.e. push too hard)

Well, one of those proved to be true.

After a conservative first half mile into the wind, I picked it up significantly over the next half mile to reel in the leaders. I believe I had moved up to 4th place just before leaving the beach, but figured I had let them go too early to make up for it. The first mile split was 5:44 (per my watch), but that probably broke down to 6:15 pace into the wind and 5:15 pace coming back.

Jackman and Lonergan led the way as runners ran off the beach and onto the trails. Courtesy of Scott Mason Photo.

Before halfway I was in third, with only Bob Jackman (2nd) and Eric Lonergan (1st) in front of me. At the time, Eric was the reigning Level Renner cover boy which sort of made him a living legend and a marked man all at the same time. That’s a scalp people go after a little harder! Oddly enough, Eric wasn’t extending his lead. We weren’t closing on him, but we weren’t letting him go either.

Just after 2 miles I saw an opportunity to get around Bob and I threw in a surge. I wasn’t sure if I’d be able to hold it but since 2016 was the year of Being Competitive, I had to go for it. The surge carried me past Bob…just in time to go down a muddy slope. The footing was so bad that I could my center of gravity shifting wildly, with my arms shooting out whichever way in a desperate attempt to keep my face out of the mud. Maybe the comedic effect of this would cause Bob to laugh so hard that I’d gain a few steps on him.

Once I got my footing, the real craziness started: Lonergan was coming back to me. I have no idea why (he just recently ran a 2:30 in Philly), but there he was. We were getting dangerously close to the church and I knew that the combo of parkour in the ruins and the headwind on the beach would make passing difficult, so I threw in another surge and went by him…just in time for a sloppy, sharp, muddy turn. Somehow I stayed upright.

The next part of the race was unlike any other I’ve encountered, and I must say, I felt like an f’n action hero tearing through that church! Jumping over that foundation wall, then jumping down onto the beach…it was fun. The high was only enhanced by the acute fear of Lonergan running me down at any moment. Thank God Scott Mason was there to capture it all. 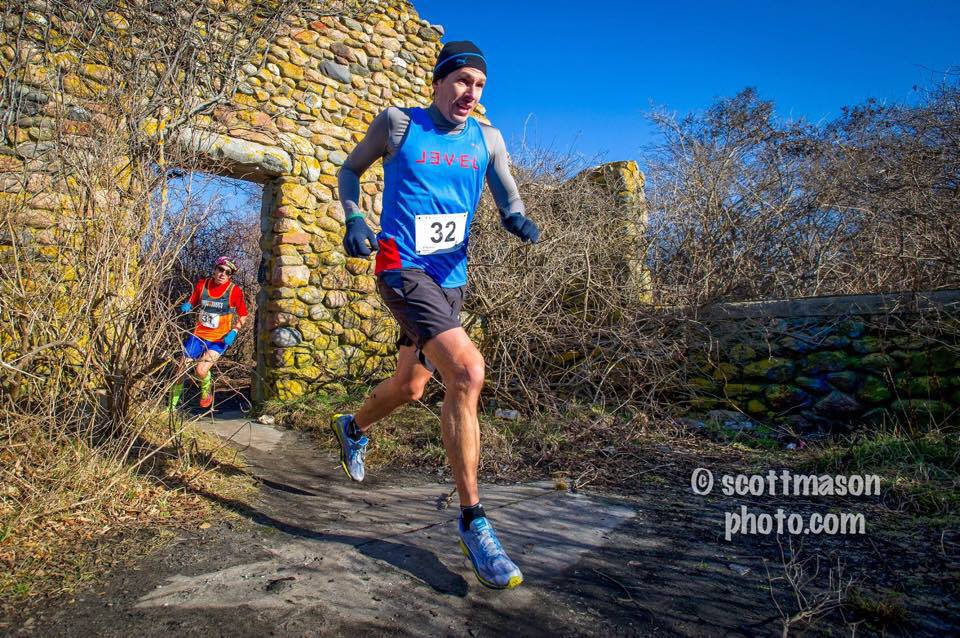 On the beach, the sand felt like quicksand. The wind felt like it was going 100 mph. Despite my earlier assessment about the difficulty of passing here, I was certain that Eric was going to devour my hopes and dreams over that final quarter of a mile.

And here’s where I was wrong: I was in the lead after all, and then I did something stupid (in a way). I was pushing way harder than I wanted to on this day. But after nearly 3 miles of running, the last thing I wanted to do was give it up.

Will 2016 be a year full of PR’s? Only time will tell. But initial results are good: I got the win in 17:48.6. Perhaps most importantly I competed and came away from it feeling good.

Had a blast at the race and absolutely recommend everyone do this at some point. Spectacular scenery, a great small race feel but with serious competition…it’s got it all. And if you get too muddy you can always jump into the Atlantic to wash off. For more… 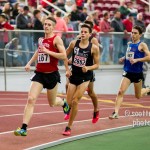