Runners Brave the Cold at the Kingman Farm Snowshoe Race

Start of the race, courtesy of Scott Mason Photo.

At 6:00 pm on Saturday February 13th, it was a chilly 3 degrees in Merrimack, NH. When you factor in the 30+ mph wind gusts it felt more like -17 degrees. Perfect weather for staying indoors by the fire, or for those of us who crave adventure, heading out to the woods for a snowshoe race.

It’s been a tough winter for snowshoe racing in the Northeast, and even though there was finally some sufficient snow, race director Chris Dunn was left with a difficult decision on his hands. Postpone, or even cancel, due to the dangerous cold, or go on as planned with extra precautions in place? Chris knows by now that it’s pointless to fret about uncontrollable things such as the weather. “We postponed events early on and crowded the late season schedule. At this point if conditions don’t allow there will be cancellations.”

But snowshoe racers are a tough breed and they can handle the trying conditions. Actually, running in the cold wasn’t even too big of a deal. For all involved, it was the standing around that was the most difficult. While the runners were worrying about moving around in the cold, Chris was concerned about his timing crew which was tasked with standing out in the elements. “Snowshoers have the ‘benefit’ of generating body heat. My timing crew is asked to sit or stand in the elements for the duration of the race. To keep them sheltered I pulled my Tacoma up to the finish line for them to sit inside and stay warm.”

Women’s champ Leslie O’Dell echoed Dunn’s thoughts in saying “I actually wasn’t that cold during the race. Standing on the line for 5 minutes before the start was the worst part, but once we got going, I warmed up fast. Only my face froze, and I kind of regretted not wearing something over it.”

Men’s champ Jim Johnson was down on it a little: “The last one was admittedly not as good as the rest but it was far better than a lot of older episodes.” Wait. Sorry, we were talking about the X Files. About the race he said, “For me ‘racing’ in cold like that isn’t even noticeable. What is uncomfortable is the lead up… warming up, waiting around at the starting line, etc. Once you get going it’s like any other day. Nothing bothered me. The only thing that sometimes is an issue is if you don’t have proper gloves on and your hands & fingers get numb and sore.” He was on top of this glove situation so he emerged from the woods with all 10 fingers.

Still, in temps that dangerously cold, safety is a concern and there’s bound to be some newbies in the group. Once the decision to race was made, Chris took another step: “after thoughtful consideration I decided to do two things; 1.) remove the section of the course in the open field to minimize exposure and 2.) make it obvious in my pre-race email that I was aware of the wind chill warning and that folks should take precaution if they decided to race or stay home if they were concerned.”

Surprisingly, this wasn’t even the coldest race for the two champs. “That was probably the coldest I had ever raced until 10 hours later when 15 of us crazies toed the line at Horsehill. THAT was the coldest I’ve ever raced in,” said Leslie. Leslie actually had more issue with keeping her headlamp in place than the cold. But that’s arguably even more dangerous when you’re racing through the woods at night. Temps for Horse Hill the next morning were -2 but felt like -25 with 20mph winds. Whoa.

JJ agreed with Leslie on Horse Hill (and the weather data backs it up), but neither were the coldest for him. “I still think the coldest I’ve ever run in was the Hangover Classic (New Years Day) in Salisbury a bunch of years ago. I don’t ever remember feeling colder than that day.”

So with all the warning from both the news media about staying indoors, and even from the race director himself, a whopping 104 people still finished the race. That’s more than the 86 that crossed the line in better conditions last year (88 if you count the two CMS guys who took a wrong turn).

JJ won the 3.3ish mile race handily in 23:01. While Jim was sporting the Six03 colors, he’s also a CMS guy and right behind him was his mate from the other team, Colin Carroll. Colin was locked into a tight battle with 16 yr old Atticus Stonestrom. While they both had the same time (24:32), the wily vet Carroll leaned on his experience to nip the youngster at the line.

Leslie O’Dell won the women’s race in 28:25 and she had a couple of minutes on runner up Sarah Canney (31:04). Leslie, also a Six03/CMS double agents (we hear there are lots of those running around), placed 13th overall. Perhaps most importantly, Leslie got her revenge on 10 yr old Aidan Cox (17th, 29:27). In a comment littered with “LOL’s”, Leslie said “My number one goal at Kingman was to beat Aiden Cox so that I wouldn’t have to read another shaming Level Renner right up about it. I actually feel like I’m all of a sudden in much better shape than I was 3 weeks prior, so I felt confident I could beat him this time around.” Mission accomplished Leslie!

For more on the race, check out this gallery by Scott Mason Photo. 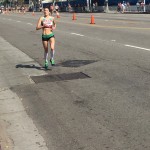