Manuel Gonzalez, in the lead at mile 7. (2nd and 3rd place runners are just at the top of the hill by the car).

For the past 3 years mother nature seems to have had it in for the Old Fashioned Ten Miler and Flat 5K, with snow resulting in a race cancellation in 2013, a race course modification in 2014 and a snow makeup date in 2015 (March). Luck seemed to be back on the side of the OFTM in Foxboro on Sunday, February 21, 2016, for the 21st edition of this race. Runners welcomed temperatures in the 40s, partly cloudy and breezy skies and no snow on the ground. This was a welcome change for new race director, Mike Cullinane, and Wampanoag Road Runners president, Sandy Sheehy. The OFTM, sponsored by Ashworth Awards, is the Wamps’ marquee event, with all proceeds going to local charities (local food banks, Foxboro HS scholarships, Wrentham Developmental Center, just to name a few). When the weather is good, everyone benefits: the runners and the charities. All hands were on deck from Wamp Club members volunteering to ensure a great day for all.

The warmer temperatures for February and clear skies inspired many runners to come out to test their winter fitness, with 219 finishers in the 5K and 498 finishers in the 10 Miler. Prize money for the 10 miler may have been an additional draw: $100 1st M/F; $50 2nd M/F; $25 3rd M/F. The race also has a history of hosting a fast and competitive field, with many training for Boston or other spring races. The course record of 49:34, set in 2012 by Roland Lavallee, is proof of the caliber of runner drawn to OFTM.

Although the 2012 record will stand for another year, there was no lack of talent or speed at the top of the 2016 field. The men’s winner for the 10 mile race was Manuel Gonzalez (26, Brighton, MA) in a time of 53:59. He was just about a minute faster than second place finisher, Dave Brooks, 31, 54:51. Gonzales, a member of the Greater Boston Track Club since 2012, came “to run the OFTM to get a sense of where I was in my training and I’m extremely happy at how well it turned out.” Gonzalez, who will run Boston in April as a training run in his build up to his goal race, the Cincinnati Marathon on May 1st, has been averaging about 80 miles/week and will peak at about 90-95 miles/week. His goals for the OFTM were “to run a fast time and be as consistent as possible and I met those for the most part. The course was pretty tough and miles 4-7 were pretty hilly and at times the head wind was strong. It was challenging and tough but definitely worth it. I was glad to have raced a good time.” Gonzalez is feeling confident about his training, and credits his GBTC teammates for making tough but necessary training workouts, like tempo runs, more manageable.

If there had been team scoring for the race, GBTC would have easily won, with 4 runners in the top 9 spots. Eric Mendoza, 31, finished in 4th in 55:19 (2nd AG); Shaun Dever, 29, 7th in 56:51 (2nd AG) and Anthony Crudale, 38, 9th in 58:53. Mendoza says “GBTC has had a tremendous impact on my training…having a core of teammates that I can train with several times a week”, a sentiment echoed by Dever, “Manny, Eric and a group of GBTC guys push me to be better every day.” Both Mendoza and Dever also commented on the challenging and hilly course at OFTM, but that it is perfect training for their spring goal races. Mendoza said, “I am not training Boston for this year (although he has a PR of 2:34 there)….I am actually attempting to get into the Elite Corral at Bloomsday 12K in Spokane, WA” on May 1st. Dever is gearing up for Boston on April 18th, and knows his tough training runs with his teammates will pay off on Patriot’s Day.

Annmarie Tuxbury, all alone with a commanding lead at mile 7.

For the women’s race in the 10 miler there was no contest for 1st, with winner Annmarie Tuxbury, 21, of New Hartford, CT, reaching the finish in a blazing 1:01:33, almost a full 4 minutes ahead of the 2nd place woman, Kimberly Bolick, 1:05:19. Tuxbury, a senior at Bryant University, and a former member of the Bryant Track team, is currently sponsored by the Woodbridge Running Company in CT (and this was her first race in their singlet) and iis coached by Ray Lapinski. She is a member of Milford Roadrunners, but does most of her training alone, with her coach sending her workouts while she is at school. Tuxbury is new to racing longer distances and “just getting my feet wet with road racing.” She did the 3K steeplechase and the 5000m when on the Bryant team, so 10 miles was “a bit longer than I am used to. I like to go out fast in races and having this be my longest race I didn’t feel like I was running alone as I was running ‘scared’ expecting someone to blow by me. I had no idea I was leading by such a large margin.” She does have experience with 1st place on the roads, having won the New Milford CT 8 miler in July. Lapinski commented about Tuxbury’s race on Twitter, “As her coach I’m pleased with the result, but she can go much faster.” Next on her race schedule is WPLR 5K with her Milford Roadrunner Club.

The top male masters runner was David Principe, 49, from Johnston, RI in 59:32 (11th overall). Principe, a Tuesday Night Turtle, and past LVL cover model, credits running well at his “advanced age” with consistency in training. “I try not to vary my mileage from season to season. I find it is easier to stay in shape at this age than get back in shape.” Principe is training for Boston in April and Bay State in the fall. His race goal was to get in “under an hour” and get his training miles in for the day, which he and training partner, Bob Jackman, accomplished with a 5.5 mile warm up and 3.5 mile cooldown, for 19 miles for the day. “All in all it was a good day!”

The top female masters runner was Lauren Leslie, 54, from Warwick, RI in 1:12:20. Leslie runs for Rumford Road Runners/R3 Racing, a club she began 3 years ago with a partner, for both youth runners and to highlight local masters runners. As a runner for 30 years, when asked about secrets to maintain longevity and speed into her 50s, she credits the class she teaches at Performance PT for strength and conditioning for runners. “I believe this is the key to staying injury free and fast. I focus on exercises to keep my body challenged.” A sports massage every 2 weeks is also a must. No marathons are in her future, as she’ll be racing mostly mile, 5K, 10K and 10 milers with a goal to race in every state (she is up to 20 states so far).

The Flat and Fast 5K was won by Ryan Oosting, 15, a freshman and 3 season runner at Arlington High School, in 17:28, about a minute faster than 2nd place finisher Glenn Miller, 53, in 18:32. Oosting came to race in Foxboro “to see where he was with his 5K time”. He had not been feeling well this week coming into the race, so arrived with low expectations. He found the course to be nice and flat, as advertised, “but a few more turns than expected….but the straight parts made up for that.” He was hoping to have someone up front do the work, but the pace was too slow, “so I passed him and stayed in the lead.” Oosting has a 2 mile PR in his 2016 Indoor Track season of 9:51.

The women’s winner in the 5K was Erin Colleran, 36, of Westwood in 20:07. This was not a 5K PR for Colleran but “it is a fast time for me, it’s also a fast course. They call it the flat 5K and they are not lying.” She is currently training for a Spartan Beast race in April and her training plan combines “crossfit workouts and intense shorter runs….a lot of my speed work after this will be based off of this race time.” She went out with a goal of 6:30 pace, fell into a rhythm, and 1st woman and 5th place overall, and stayed in that spot for the duration of the race. Colleran races with teammates from Greater Norwood Running Club, and 2 of them raced the 10 miler: Roberta Myers, 50, 1:12:28, 2AG and Maureen Larkin, 51, 1:14:40, 3AG. 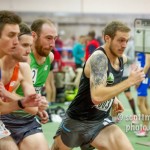 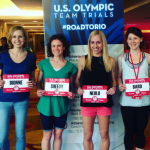