Well, I did it! I ran in the Olympic Trials!

After missing the qualifier in 2012 by ~40 seconds and then again in 2016 by 16 seconds, I was (very surprisingly) given my chance to participate by a loosening of the qualification standards in late December 2015. It had been 2+ years since I ran my qualifying marathon and well over a year since I had raced a marathon,* period.

If you read my previous post, you know that I wasn’t necessarily at my fittest going into this weekend’s competition, but I was able to round out a decent training block and get to a point where I thought that running ~2:50 would not be out of the question. But then, everyone’s favorite taper distraction developed into everyone’s most popular marathon nightmare and a heat wave hit LA, with race day temps reaching near the 80s.

There have been a number of articles, blogs, tweets, etc. about how the organizers could have done a better job taking care of the athletes competing on Saturday. While I agree wholeheartedly, I won’t waste your time reiterating what people have already detailed so eloquently elsewhere. Instead, I will try to turn a frown upside-down and provide a perspective (which my lack of fitness/expectations/goals have helped allow) on these most terribly miserable 26.2 miles along a sun-soaked loop in a smoggy downtown Los Angeles.

For the people who worked so hard to run a fast time (or a PR) on Saturday, I empathize. It’s heartbreaking to train for weeks, months, years toward a race against the clock, only to have the conditions sabotage your efforts. But, for me – I was out there for the experience and while, if given the choice, I definitely would have requested 50 degrees and cloudy over what we had, the heat and sun (and inadequate hydration) did not ruin it.

I think for many of us, we were not out there seeking our spot on the Olympic Team, but rather to recognize and embrace all the work we had done to improve ourselves. We set goals, we got up early, we stayed late, we pushed when it hurt, we abstained, we were cold, we were hot, we were soaked, we got beaten, and we won.

While the trials were not run in conditions that people would ask for when running a 26.2 mile race – especially on such a big stage – they were a true embodiment of the courage, the strength, and the perseverance that not only goes into setting ambitious goals and deciding to work toward them, but also asking for help and support from the people around us. What many spectators witnessed, and what many athletes felt out there on Saturday was a competition, yes, but more so it was a community working together. We worked to make ourselves and each other better: we shared water, we stopped and encouraged, we cheered, we asked for help, and we gave what we could.

I didn’t have a fast race on Saturday, but I did have a great race. I’m so grateful for the running community – for my friends, for my competitors, and for the people who have chosen to support me.
[…]

Also running such a hard and terrible race only gives me more motivation to get out there and train toward a great spring of racing!

Some pictures from the weekend: 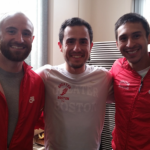 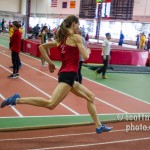