The 2016 USATF-NE Grand Prix series kicked off Sunday in Cambridge, MA with the An Ras Mor 5k. The opener just so happened to fall in between a couple of big events this year, but how would that affect the competition? The Olympic Trials marathon was only a couple of weeks ago and the national road 15k championships are this coming weekend, and while both events featured (or will feature) local athletes, it was the former that arguably had the biggest impact.

With Lou being the defending series champ, he had to have been the favorite coming in. When the gun went off, it was the Heartbreaker himself immediately out in front, but that wasn’t part of the plan. “The pre-race plan was to sit and close hard over the mile but at the same time I wanted to make sure that the pace was modest up front so we didn’t have a big pack of guys going for the win with a mile to go.”

Nothing but open road between Lou and the finish line. Courtesy of Scott Mason Photo.

Two hundred meters into the race and the strategy was out the window. Luckily Lou adapted on the fly and focused on running steady and comfortable, hitting the first mile in a lively 4:44. “I never really felt in jeopardy of losing the lead – I just tried to keep the pedal down enough to have a 5-10 second buffer. ”

While Lou was livin’ large at the front of that 5-10 second buffer, the rest of the pack was dealing with an adventurous race. A couple of pedestrians tried to force their way through as the front of the field came by and it wasn’t pretty. What it lacked in grace, it certainly made up for in humor. One such “gentleman” reportedly shouted out to the competitors: “Marathon’s over, boys!” as he bulled his way to the other side. Look, had he told everyone that at the start then maybe we all could’ve agreed to not run and just proceed right to the Middle East. But no, he had to wait until the race was well under way. Some people…

A little later in the race, the situation was less comical and way more dangerous as a criminally detached motorist decided to try and enter the race in his vehicle. Nate Jenkins was right in the mix at the front and unfortunately had a front row seat for the shitshow:

“After the cop and Louis went by a white Tahoe backed out in front of us. Some scrambled behind it, while I and a couple others were in front of it. As we did that the ass drove forward into us but luckily we were able to jump up the nearest driveway and onto the sidewalk. Unluckily we were in Cambridge so we were stuck on the sidewalk for a bit by all the parked cars.”

In that driver’s defense, he had also been told that the marathon was over and thought it was safe to drive. In all seriousness, that’s a pretty shitty situation to find yourself in on any run, let alone during a race. But in a city race such as this one, with so many cross streets and driveways, you need the local citizens to exercise caution and common sense. Even with a good police/volunteer presence working traffic control it’s still very difficult to control the entire course.

Back to the race action, and Lou was still out in front but he’s lead was quickly shrinking as the ‘freight train’ was catching up to him. “Had the pack caught me with 400 today I think I would’ve had a gear to respond but thing certainly would’ve gotten interesting!” It was interesting, but it was also still clear that Lou had it coming down Franklin St towards the chute. Right behind him, things were a little murky.

After Lou broke the tape in 14:44, Aliaksandr Leuchanka (Millennium) was at the front of the chase pack in 14:47, followed by Andrea Sorgato (Battle Road TC, 14:48) and David Melly (Heartbreakers) in 14:50. The next 4 all came in at 14:51 officially: Alex McGrath, Nate Jenkins, Teage O’Connor and Brad Mish.

“It’s pretty awesome to see such a deep contingent of runners in NE this year. Nine under 15 on a windy day in Cambridge – most of them negative splitting? Pretty impressive.”

Speaking of that depth, Lou’s fellow Trials qualifier Dan Vassallo bounced back from LA with a spry 15:06 and finished 16th. As good as that was, Dan was remarkably on the third CMS runner on the day (behind Pat Fullerton’s 15:02 and Nate Jenkins).

Nate Jenkins brushed off the run-in with the Tahoe and went on to lead the CMS men’s open team to the title. Nate showed tremendous strength and heart competing the way he did after just suffering the loss of his brother. Even if you are an elite runner like Nate, it can be hard to race if you’re not in it mentally. It’s hard to think of any other situation that would weigh on your mind more than that. Kudos to Nate for a tremendous race under trying circumstances.

Like Serafini, Hagley was bouncing back from the Trials where she finished 25th in 2:43:11. After that impressive showing and knowing that she lost out on the series title by the slimmest of margins in 2015, Laura was looking to be the one to beat in Cambridge.

Laura is no stranger to the race as she actually ran it as her debut for Millennium two years ago, the last time the race was featured in the circuit. “This year, I was really just hoping to place in the race going into it. I’ve been recovering from trials – you know, gained 9 lbs to assist in recovering, only one session of intensity in three weeks since the race, low mileage at 50-60mi/week, and absolutely no specific training at 5k pace besides striders all last season.”

Laura was hoping to run 5:30’s, and that’s what she did. “I wish I had a better story, but I’m the kind of racer who does what I set out to do and place if I get lucky – when what I set out to do happens to win me something! There were so many girls ahead of me in the first mile, so I had no clue if there were remaining women scattered in the large sea of men ahead of me throughout the race. I quickly lost track of any placing from the start (which is my style anyway), and only toward the end realized I was the first woman when people started telling me so on the final longer stretch before the turn to the end.”

In a short race like this with a deep field, it’s a little challenging just pulling top women’s finishers from the results, so we can certainly understand how hard it must be to try and track your competition in the midst of the crowd. Luckily for Laura things were more comfortably in hand as she ended up with a decent cushion between her and her competition.

Laura finished in 16:59 and second place was Rebecca Hammond (Battle Road) in 17:16. Rounding out the podium was Meghan Curren (RUN), who squeaked in ahead of Apryl Sabadosa (WMDP) even though they both had 17:27. Meagan Nedlo ended up 11th in 17:46, a good showing after a tough LA experience.

Speaking of Nedlo, she led the Craft Concept Racing team to the title. It was fairly close, but they edged the GBTC ladies by an average finishing time of 17:52 to 17:56. They didn’t even have Hilary Dionne either!

The Millennium ladies were missing a few studs but Hagley paced them to a 3rd place finish and she’s optimistic for the rest of the year:

“I think Millennium’s chances for the circuit are great. We have a strong distance team, which the remaining NEGP races all favor. We’ve also got some great new additions to the team, both Men’s and Women’s; I think the fullness of their talent is yet to be realized.”

Next up is the New Bedford Half Marathon, which is arguably the anchor of the schedule since it seems to be on there every year. It’s circled on the calendars as the traditional spot for the USATF-NE half marathon championship for some and the last solid tune up before Boston for others. The fields will be fast (and a little furious). Before we get there though, there’s a little thing called the Gate River Run which once again is the site of the US 15k road championships. Lou Serafini will be out there for it (one of a few area elites making the trip):

“It should be interesting! I think the lungs are there but I know the sharpness is NOT there. That being said, I know I’m ready to mix it up. 15k is a good distance for me – not too long, not too short. I’m just going to put myself out there and see what happens. I’d love to see Tim Ritchie pick up win in the process. :)”

Check out our finish line footage from the race:

Be sure to check out Scott Mason’s gallery from the day and if you see something you like, make a purchase. Please help support one of the guys that helps keep us going. 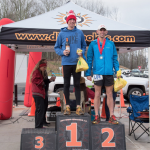 Another Dirty Spokes Win for Haley