Pawlicki Gears Up For Boston with the Black Cat

I had an opportunity to run the Black Cat 20 mile race in Salem so I signed up during the week. I needed a long run (at least 2 hours) with the impending Patriots Day circus. The justification concept was to run the race between 6:35 and 6:55 per mile pace overall. I also planned on trying Hammer Nutrition Endurolytes for electrolyte replenishment. I have severe muscle cramps targeting me in long races like the marathon (Boston, Manchester City, & Vermont City). The Hammer product is similar to the Salt Stick product that I have tried in the last two marathons but still cramped after 15 and 18 miles respectively.  I took two caps 90 minutes before the race. For breakfast, I had oatmeal with Peanut Butter Granola, a cup of coffee and 30 oz of water. I drained a RedBull ten minutes before the start of the race. I got to the starting line with two minutes to spare after a 2 mile warm up with Dan Chruniak and Bradley Gates.

The weather was perfect;  sunny and temperature in the high 40’s with a warm up into the 50’s by late morning. I wore the Level Renner singlet as there was no critical mass from SRR or CMS for team competition (3 coed score).

The course is a 10 mile loop from the Hawthorn Hotel down Lafayette Street, past Salem State (Rt 114) into Marblehead for a turnaround at Devereaux Beach. The course runs back to Salem via 114 and a 2.75 mile loop to the Salem Willows and back to the Hotel. The 10 mile folks stop right there and the 20 mile folks go out for another loop. The B&S Fitness site, host event management, bills the race as flat and fast. I knew better but the ones to whine about is the one at the Salem and Marblehead line (heading into Marblehead) and the hill rising to Salem State University heading into Salem.

To recap, I will break the race into 5 mile segments. The first five contained quickest mile (6:24 for mile 2) feeling out my legs and determining who was in the race, who was doing 10 vs 20, and who is a master. I backed off the pace after two opening sub 6:30’s and ran solo for the most part. It was hard to watch the front runners move away but I had to stick to my plan which was really not to run too fast and be a mess beyond my fitness.

The 2nd five miles was more solo isolation with a few guys going by me. I took a PowerGel and two Endurolyte Caps before mile 8 near the entrance of Winter Island. I had trouble getting the caps out of my sandwich bag so I stopped at the water stop to finger them out and drink water. I added at least 15 seconds there creating  my slowest mile of the day (7:04). Dan Chruniak went by after 8 miles, asked how I was feeling, and proceeded to pick up the pace. He looked way too comfortable. I went through 10 miles right around 1:06.

The 3rd quarter of the race felt lonely and the legs were tired. I backed off the pace a bit, now running some 6:40’s. A BAA runner passed me before reaching Marblehead. Letting him go by and not racing him frustrated me but I stuck to my plan, having no choice. The leaders did their turn around and were coming at me, giving me a chance to count places and monitor who was behind me once I did the turnaround.  The Wicked tandem of Michael Paulin and Bradley Gates were about 20 seconds behind me. I yelled over “uh oh” joking but aware they were likely going to catch me. I was tired but looking forward to the last quarter of the race.

Now heading back into Salem for the last five miles, I took my last PowerGel and last two Endurolytes caps. Michael caught me on the hill up to Salem State. I hung with him down Lafayette street to bounce back with a low 6:30 mile and feel my first muscle cramp – my right calf. I had four miles to go and was really concerned how many more times that was going to trigger. I told Michael about it and he told me what I knew – back off. I did and in turn, Bradley Gates caught up. He shared that he was hurting, as did I. Like two wounded birds, we stumbled along, supporting each other with company and a few words all the way to the finish. It was nice to see Krissy at Pickering Wharf and at the finish. My time was 2:12:44. I was not sure of the place, but Michael was a good minute and a half in front of me and Bradley was about five seconds behind me. I had to leave the race in a hurry.

To the finish line. Courtesy of Krissy Kozlosky.

The race is put on and managed by B&S Fitness. They hired Racewire for the timing. I checked the results yesterday and today andfound several runners missing in the 20 mile results, including myself. Dan Chruniak, Jason Bui, Brandon Ring, and Bradley Gates are missing. I sent Racewire a message yesterday evening.  They have not returned a response, per their 24 hour policy. Too bad, but we’ll assume they have been working around the clock to fix the results. Meanwhile, B&S Fitness responded to my email inquiry about the issue today. They felt bad but deferred to Racewire to clean up the results. Let’s hope they resolve the issue.

A few photos by KrissyK

Myself, Michael Paulin, and Bradley Gates. Courtesy of Krissy Kozlosky.

*Editor’s Note: Originally this was published on the Level under the comically misleading headline of ‘Johnson Gears Up For Boston with the Black Cat’. That’s what happens when you stay up a little too late to get some more work done after a sleepless Daylight Savings Time weekend. Lesson learned. 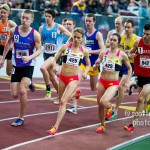