“Yeah baby I like it raw, but come on…this shit is ridiculous.” -Old Dirty Bastard during a long run on a cold, crappy day

Okay, maybe ODB never said that, but the sentiment is the same. The runners who lined up in Burlington State Park (Charlestown, RI) for the Brrr-lingame 5 & 10 Mile Trail Races saw some mild temps in the forecast, but instead were greeted with a chilly, breezy, overcast day.

But before we go any further, I’m gonna have to shed the attempt at hiding the fact that this is going to be another first person race report here. I’m too lazy to try to hide it. That being said…

The last two races came down to me and Eric Lonergan, and I hadn’t seen him on the pre-reg list. I thought I was safe. I was wrong. At the reg table that morning race director Mike Galoob revealed that not only was he there, but he brought along his über fast teammate Pat Moulton. Oh boy.

Moulton led from the gun, followed by Lonergan and then me. The chase pack consisted of series stalwarts Jonny Hammett, Steve Brightman, Justin Bentley and Bob Jackman. They couldn’t be counted out. The pace was quick and I could hear the breathing behind me slowly fade away. Two miles into the race and it looked like it was down to the aforementioned lead three guys. However, when we got to the trickiest climbing of the day in the 3rd mile, everything changed. Molten and I were rookies on this course, the rest of the gang knew what was coming: a ridge with tight turns, roots, rocks, switchbacks and not a lot of room to maneuver. In other words, a technical bouillabaisse that you could easily choke on. For whatever reason, Moulton slowed down.

Eric and I were right on him, and I considered passing to keep up the pace but it was tight. Before I could decide what to do, my attention suddenly shifted to the sounds of breathing and footsteps that were rapidly growing louder. Pretty soon our pack of 3 had turned into a motherlovin’ peloton.

There was a few seconds of a polite traffic jam before all hell broke loose. A crashing sound to my right, followed by a sasquatch careening onto the course and into the lead. However, that was no sasquatch. That was Bob Jackman, making a power move and shaking things up. Steve Brightman and Justin Bentley and Jonny Hammett followed suit.

Were just about done with that section, and as soon as there was room to maneuver, Lonergan broke free and I tucked in after him. The wider stretch of trail felt more like a carriage road (or a track) compared to what we had just been through. We took advantage of that and opened things up. Pretty soon no breathing or footsteps could be heard; it was down to another round of Eric vs Eric.

The fourth mile brought a fresh hell, the likes of which I’d never seen before. The race website describes it as such: “The trails are generally fast hard-pack, but several short steep hills, a few bog bridges, as well as February conditions will all challenge racers.” A few bog bridges, you say? Remember Mario Kart for Nintendo 64? Navigating those bog bridges was like trying to maneuver those levels on the suspended wooden bridges…while deep into a case of Natty Light. It was all I could do to keep from flying off the damn things on each turn.

When we turned onto the single track leading up to this portion, Lonergan had put a few steps on me. I wasn’t concerned as we had a lot of race left. However, he padded that lead as he gracefully floated over said bog bridges. At least he looked pretty damn graceful as I was inventing curse words. This obstacle course was doing me in! If there was a version of Double Dare hosted by Beelzebub somewhere in a dark circle of Hades, this was surely it.

Truth: I was angry once we were clear of those bog bridges. I gritted my teeth and bore down to catch Eric, and I did. In reality, that was my final move, and it was only the 5th mile. We hit a small ravine that we needed to cross, followed by some smaller ditches, a beach, and then some more logs to navigate. I was toast after that.

We rolled through the halfway point/future finish area with Eric about 5 seconds up on me, and he just slowly opened it up. We had to go do it all again and just the thought of those damn bog bridges was eating away at me.

Eric and Eric in the lead pic.twitter.com/JDd5VvemPo

I suggest listening to the audio on the above video clip. The rest of the race was rather uneventful as I was left to wrestle with my demons in no-man’s land, save for fleeting glimpses of the ever escaping Lonergan here and there.

That was Will Lynch there in 7th, the same Will Lynch who won the first Fool’s Mile beer mile last September. Will had rolled his ankle in the woods and was stopped off to the side. Jackman came along and told him they were almost done so Will shook it off and charged home, suddenly locked into a heated battle for the line with Bob. The results shown here don’t quite do it justice as there had to have only been .01 seconds separating the two. It came down to a lean. After a 10 mile trail race. You don’t see that too often.

Paige Ethier won the 5 miler outright in 37:30, while the top male (Jacob Magiera) was just behind her in 37:32. Paige had led all women for the first mile of the race, but then Leslie O’Dell took over from there. She was on a mission, wanting to be the first women to pass through 5 miles even though she had a second loop waiting for her.

Leslie did just that, passing through halfway in roughly 37:00 and coasted the rest of the way for the win in 1:11:54. That was good enough to get Leslie 10th overall and put her nearly 14 minutes ahead of the second place woman (Sarah Kemble in 1:25:35).

The last race of the series is coming up on April 30th (Big River Half Marathon), and Lonergan’s win made it more interesting. If he wins the last one and I finish at least two spots behind him, then he wins the series. If I beat him, then I win the series. But…if I finish right behind him (like today) then we tie. What happens then? How do we break a tie?! Early word is we’ll have to move into a studio apartment together for the next year, rent paid by Mike Galoob, and be part of a reality show.

On the women’s side, Leslie O’Dell can’t win. She missed the first two race, and your best 4 (out of a total of 5 races) count towards the final standings. So right now it’s down to Beth Travers (365) and Elise Huysman (361). Both have run the first four races, so it’ll be interesting to see how that shakes out in the final event.

One final noteworthy item: our Grinder of the Day. Justin Bentley turned it into a long run day, even after suffering 3 falls out on the course. His face was, shall we say, muddy? At one point during the awards ceremony I looked out across the field and saw him running along the tree line. I could barely get through the 2 mile cool down I did with him, but he kept on going and got in another 5 (putting him at 20 for the day). Grinder!

For more on this race:

*Note: the featured image is by Scott Mason Photo and is from last year’s race. There was obviously no snow on the ground this year! 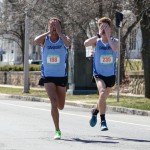