Last year, the State Employee’s Association Road Race in Concord, NH drew quite a field, featuring a single-age record for 9 year olds and a men’s senior’s NH State Record. More of the same returned to take advantage of the flat, fast, certified 5k course the S.E.A race has to offer. The race also serves as the 2nd installment of the 2016 Capital Area Race Series, which brings forth some fast local runners in the Concord area.

Though a Central Mass top 3 sounds pretty cool, they can’t steal all of the attention from our 4th place finisher. Just a parking lot length behind Kevin Tilton, the spectating crowd saw 10 year old Aidan Cox come storming across the line, shattering the existing single age world record for 10 year olds in a blazing 17’24. Last year at this same race, Cox ran 18’03 to snag the 9 year olds record and his fitness is only improving. Cox was near the top of the NH state middle school XC lists last fall competing as a 5th grader and he will be one to follow in the coming years!

On the women’s end of things, Whirlaway Master’s sensation Christin Doneski raced to a dominating victory in 18 minutes 51 seconds. Doneski was the Capital Area Race Series champion in 2014 and 2015. She’s looking to complete the hat trick by winning this year and is well on her way, scoring the perfect 1000 points in the first two events – the Gilmanton 5k being the first of those two races. Sarah Burdette would cross the line as the 2nd female in 21’13 with New Hampshire Technical Institute XC front runner and Greater Derry Track Club member Ryleigh Lorimer 3rd in 21 minutes, 47 seconds.

We’ve got some video proof courtesy of Kristin Johnson: 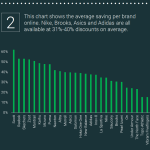 RunRepeat Analyzes the Prices of 183,911 Pairs of Running…