A couple of days after my last race, I was hit by a rather powerful metaphor. No injuries, I’m pleased to report, but it did make for a good lead-in to the tale of that outing.

Dearest Spouse has rightly given up trying to stuff freshly laundered (thanks of course to her) running wear into my overstuffed bureau drawers (which border on explosive failure due to years of race shirt accumulations and expo bargains). The Monday after said latest race, we were treated to half a foot of sticky April snow, which, glued to the roads as slush ice in the twenty-five degree air, made my trip home excruciatingly slow, and thus made the stack of short-sleeve running shirts and shorts she’d left me to stow all the more ironic. There were no cold-weather items in the mix; no long sleeves and no tights, because just three days earlier I was actually getting mosquito bites while chatting with a fellow runner after a warm afternoon rail trail run. The bugs were out, then back to winter. Go figure.

I’d say that’s just New England weather, but this year I’d be echoed with similar chants from just about everywhere. I’ll avoid going political this time and simply call it an observation. That day, having been out since morning and faced with dangerous dimly lit late day road slop, I did at least find the sanity to take a zero and chalk up a rest day of healing. I wasn’t quite so smart that previous weekend, though.

Mankind has spent millennia seeking better shelter and higher levels of comfort. Why is it that we find it so noble, so boast-worthy indeed, to forego these advances which not only make our lives more pleasant but clearly have worked to our advantage on the survival scale? Ah, simple question, simple answer: because we’re runners. Or morons. Or both.

Working backwards from our late season snow day (yes, Dearest Daughter the Younger had a snow day off from school in April), the previous day had been simply manic, starting with another white blanket, warming to melt the coating rapidly, and sucking me into the trap of a seemingly pleasant mid-afternoon run which instead turned into bone chilling squalls and brutal winds. And the day before that was merely hypothermic: rain, wind, and forty; my definition of miserably ugly (you are recalling at this point the short-sleeved laundry and mosquito bites?); or in other words, a perfect day for a race, provided it was reasonably short, and with ample shelter available thereafter. Fortunately, the Frank Nealon Boston Tune-Up met both of those criteria: at fifteen kilometers, not short by many folks’ standards, but not long enough to bring on serious exposure, and blessed by a toasty warm high school cafeteria base camp ringed by the elixir of the gods, hot soup.

To give you an idea of how attractive a day it was, two of my club-mates came to the race, looked at the weather, decided that since their target summer race in Quebec includes huge staircases, they elected to just stay indoors and run the school stairwells. Smart people, they, but the rest of us wandered out to prove to the world how much disdain we held for shelter, warmth, and comfort.

Having already decided I’d humor my local club critics and wear local club green for this one (no, they’re not serious critics, but I have taken on some good-natured ribbing for running a nearly local race in my racing club colors, rather than my local club colors, over the years), I’d forgotten that my local club shirt came from a generation back when tech shirts checked in with the thickness of light steel plate. Looking at the race photos, I’d guess to have been carrying an extra five pounds just in the shirt, stretching into an elasticized sail of numbing proportions. It’s a special feeling when your shorts are so glued to you that, well, need I really describe that part? 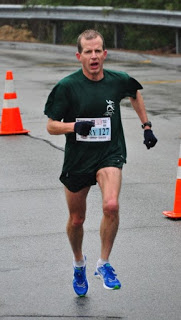 While sailing the Seven Seas of Upton may have been uncomfortable, conditions really weren’t too bad for racing; certainly overheating wasn’t a problem. And the results really weren’t that bad, either. On this, my sixth outing at this venue, I knocked a half a minute off last year’s finish, landed my second-best age-graded performance (within a point of my top rating from three years back), and once again took the seniors’ division crown. My random stranger warm-down companions were duly complimentary of my age-to-finishing-place ratio. Yet all in all it was unsatisfying. It felt poorly executed, too hard early, too much of a fight the rest of the way, too little at the end.

Upton is a reasonably challenging course, studded with rolling hills that always exceed my recollection of the previous year’s pain. Even splits aren’t a reasonable expectation. And to be fair, the race’s title, “Tune Up”, reflects the reality that this effort is only two weeks prior to the Big Show in Boston, so this race is, to my mind, the official start of the taper (not that I’ve ever been good at that maneuver). In short, blowing out everything isn’t a goal. But while an adrenalin-fueled quick first mile isn’t something to get uptight about, this time that quick first mile wasn’t really all that quick and it was followed by a progressive fade to moderately so-so at best, if not so-so by the actual splits, then so-so by feeling far less than All Powerful. Holding ninth at the mile, I’d lose six places, one of those with only a quarter mile to go, usually my time of strength, and regain only one for a fourteenth place overall finish. Not bad, but uninspiring.

But this was, after all, a tune-up, and if nothing else, it was a hard outing in a training cycle that‘s been fine on quantity but short on quality. I have to remind myself that age grading matters; the count of sun cycles does keep increasing. More so, I can’t expect to feel rocket-powered every day, so let’s get that day of struggle out of the way now before Patriot’s Day arrives.

Besides, how does that phrase go? A so-so day at the races beats…? And even a bunch of foolish drenched rats who have shunned modern comforts can be made happy with soup.

Photos courtesy of Ted Tyler via JimRhodes.com. This post originally appeared on Gary’s blog The Second Lap. Track Gary’s progress during the Boston Marathon as he runs with bib #2427. 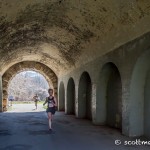