.@acidoticRACING Kim Nedeau wins #TheRivah in 65’10 a new course record for females. It’s a fast day out there! pic.twitter.com/n2OKxY88Ub

Last Saturday, Kim Nedeau repped Acidotic Racing in style at the Merrimack Rivah Trail Race as she strung together one of her best race performances to date. Kim not only came off with the victory, but also broke the existing women’s course record. Here’s a little Q&A where she reviews the racing experience and discusses big plans for the future:

Q: You lead the vast majority of the race. At what point did you break it open for good?

A: By mile one, I was lead woman. I ran conservatively for the first half until the turn around point. When I headed back for the finish, I saw that the second woman was too close for comfort. I was strongest on the technical section so I pushed really hard for those three miles but I felt held back by a lack of speed on the flat, dirt path sections. A ten mile trail race is my upper upper limit so respecting the distance was on my mind throughout the race. I think it’s my longest race to date.

Q: Kasie Enman is a national class athlete on the trails – did you anticipate you’d take down her course record?

A: Kasie is a fantastic trail runner, a hero for all mountain and trail runners. If she is within my sights, I’m having a great day. I feel that I have national class talent but haven’t quite reached my potential. Merrimack wasn’t on my radar until just a few weeks before the race. I was antsy to race so at the last minute, Coach Chris Dunn and I added it to my racing schedule. I knew my training was going well but I’ve been in my own bubble and have not raced since last August. Having feedback from a race result is incredibly validating.

Q: Were you pleased with the performance as a whole?

A: Absolutely! I couldn’t have hoped for more.

Q: What’s next on your racing schedule?

A: I have plans to race much of the USATF New England Mountain Series. My challenge will always be how to navigate my way to top of these races without high mileage. I posed this question of my coach, Chris Dunn, last fall: how far can we take this? I can’t train like a typical runner so we are testing uncharted waters in many ways. All around me, I see runners who log as many miles as they have time for. I can’t do that because of old injuries. Although it is forced, I feel like a much more responsible, mature runner than I was in my early to mid twenties when it was all about mileage. Now my rolling, balance, mobility and coordination work is as important as every mile I run (thanks to the incredible guidance from Dr. Tom Michaud!). Without this work, I’m not running; I’m on the sidelines cheering for my husband, Ethan. I love him but that gets old. Ethan’s support and encouragement is why I’m competing again. I started racing again two years ago and the momentum has been building during this time. I train hard and build volume by cross training and my quest this summer is to find out how far this can take me. I have lofty summer goals that pulled me through many months of hard training. My two major summer goals are to finish top three at Mount Washington and top four at Loon Mountain Race, which would place me on the world mountain team. There, I said it! I want to qualify for Worlds!

Q: Any interesting collisions happen on the way back or during the single-track climbing section of the course?

A: I was really careful with my own footing, never taking my eyes off the possible roots and rocks ahead but one possibility I did not consider was a collision with runners going in the opposite direction. I had reached the turn around point and was on my way back to the finish. A male runner came hurtling off a bridge, out of control. I was in his direct path; I saw injuries flash before my eyes. Luckily he was able to catch himself, yell out a quick apology and we were both on our way. I finished the race in one piece without a single scratch or bruise.

Best of luck to Kim as she chases her dreams of making the World Mountain Running Team. Her performance at the Rivah was certainly a indication she has that kind of fitness! 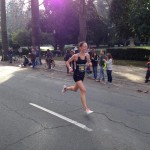