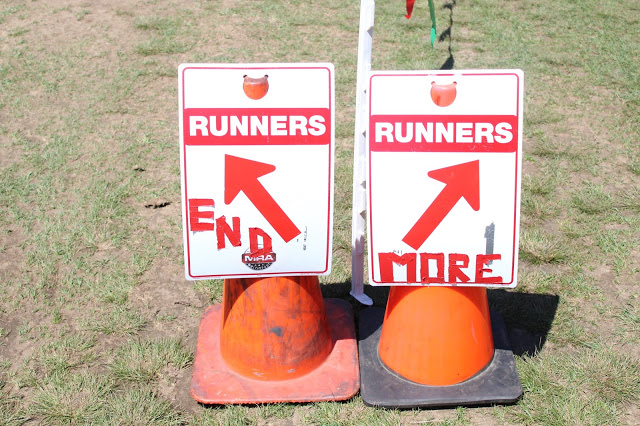 I was working at the running store yesterday, fitting a gentleman for trail shoes and he mentioned he was running a trail race today. Low and behold it was 15 minutes from my house. I needed to get in a long run today so I thought why not! I signed up online 5 minutes before registration closed and the rest is history. This has been my best race tactically over a longer distance. I am so used to being tactical on the track and on the roads, but on the trails is a whole new animal. 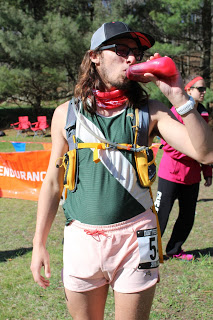 I thought this would be a great fitness check about a month away from the Pinelands 50K on May 29th. I am so new to trail racing that I never really know where I am going to be pace wise. Fast track times and workouts don’t easily translate to how well I will perform on the trails, where the terrain dictates how fast I go.

Race started at 9AM and we did a short loop around the aid station and out onto the trails. I took myself out pretty conservatively, my goal was to maintain contact with the lead group, but not kill myself. I felt I had the speed to hang with them, but I have been running lower mileage lately, I was a little less confident on my endurance. The first mile includes a climb of about 200 feet. At the top of the climb, I found myself in second and I started bombing down the trails. This course winds back on itself many, many times, so I was able to maintain visual contact with the leader as I lead a pack of 5 other runners. I didn’t push my pace, I just wanted to maintain about 100 yards behind the leader and not let him out of my sights.

Coming down into the remote aid station at mile 3.5, I almost took a digger when I tripped on a root. Luckily I caught myself from smashing my face on the ground. I was carrying my Nathan Zealos pack today in prep for the 50K so I skipped the aide station and kept moving. I was really moving along the back section of the course, many points of it are very runnable and fast, as long as you keep an eye out for the occasional roots.

At about 4 miles, the leader stopped to tie his shoe. I thought he was a runner from the 50K race that was happing at the same time and had a earlier start, so it was not until the aid station and mile 8 that I knew I was leading.  Billy was right behind me and he spent the next 4 miles right on my heels, I was running scared, and I think thats what I needed. 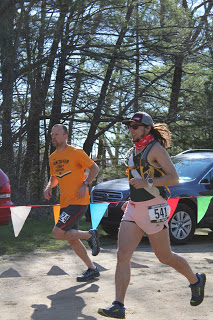 Coming down into the start/finish aid station was fun as Emily was very surprised to see me at just over an hour into the race. I told her at the start to not expect me until atlas 1:10 in so she was really shocked to see me come down the steep descent and into the aid station. Since she is crewing me for Pinelands and Last Man Standing, she was ready to help fill my pack and get my fuel ready. Billy came shooting in the aid station  about 10 seconds behind me and just kept moving. He passed me as Emily was scooping Scratch Labs into my pack and I got a little bit competitive. I knew I had a race on my hands and was hungry for the win, so I actually ended up ditching the pack and my shirt and went off into the woods again for the second loop a lot lighter.

I caught up to Billy shortly into the second loop and we talked for a minute. We were both really moving (~6:45 pace coming out of the aide station) and we both discussed that our fast pace might be unsustainable for both of us. At this point, I was so surprised by how fast I came through I was really unsure if I could hold this until mile 16. I was willing to risk it however, so I made a choice to go for it. It was here I felt I needed to make a move, I gave myself a quick 10 steps and I left him.

I worked endlessly through the next downhill section of the course, peeking back on the switch backs for Billy. I wanted to put some distance on him before getting to the 3.5 mile aid station. I wanted to have time to stop and fuel there since I was going packless, and didn’t want the pressure of someone else to make me rush my aid station stop. I took 2 cups of Gatorade at the aid station (Oh how I missed my Skratch labs) and never looked back until mile 14. I ran like a mad mad, I knew he was chasing me and I felt like I maybe would pull this off. 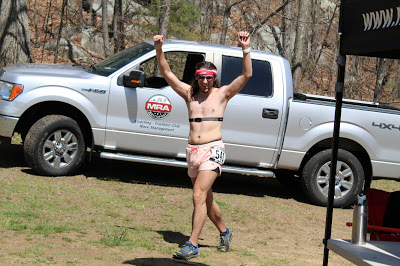 On the last climb of the day, I saw Billy behind me about 3 minutes back and I knew I could hold him off for the win. At this point, I was no longer running possessed to not get caught, but to chase down as many seconds off that clock as I could. I started hammering the downhills coming into the finish and crossed the line in 2:00:47.3 . My second lap was 59:05 for 8 miles, a full 1:40 faster than my first lap.

I really took a risk, I took myself out at a pace I was unsure I could sustain. At the end of the day, it paid off immensely. As I do more and more of the trail races, I feel like I will have more understanding of where I am and what I am capable of.

I talked to Billy after the race and we are hoping we can meet up for some runs soon. He just came back from a 12 hour R2R2R run at the canyon and he’s a fan of lower mileage just like I am. I am looking forward to getting in some runs with him over the summer as I get ready to race the Last Man Standing and be in the mix for the win there as well.  Training is on a great upswing, Thanks to Coach Ryan Knapp at Miles to Go Endurance.

On to a 3K steeplechase on Sunday!

Follow Kyle’s training and racing on his blog Running For a Year. 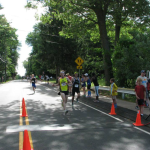 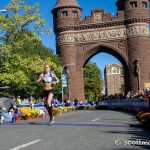