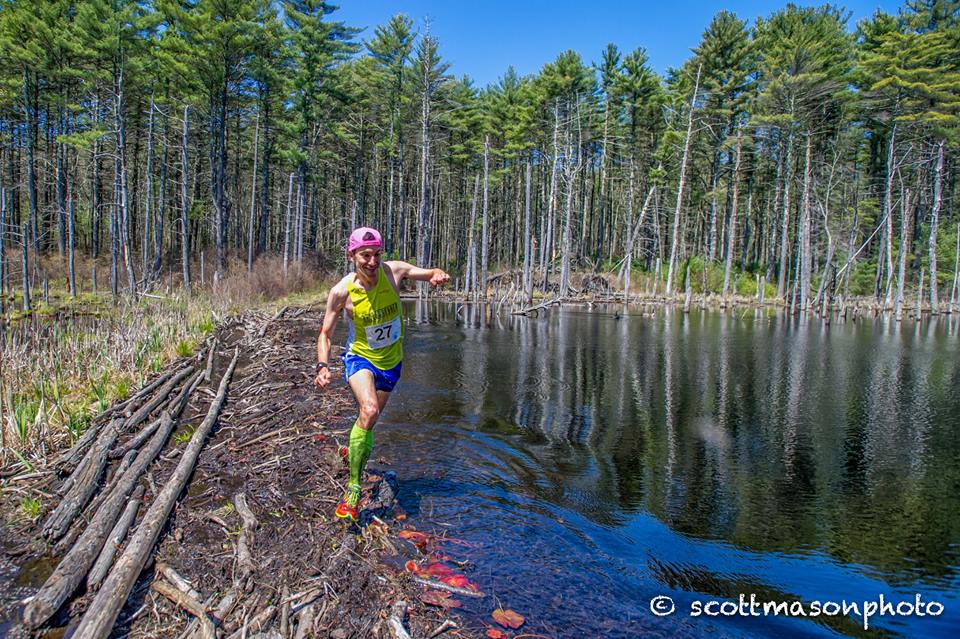 The South County 4th Season Trail Series came to a dramatic conclusion on Saturday at the Big River Trail Races in West Greenwich, RI. The last 3 events of the series ended with Eric Lonergan and Eric Narcisi taking the top two spots. Narcisi had the slight edge due to his two early season wins (5k & 10k). Lonergan had the momentum from his 10 mile win a few weeks back. Another longer race seemed to favor Lonergan. A win by Narcisi locked up the series for him, while Lonergan needed a win and Narcisi to finish at least 3rd…or else there’d be a tie.

The field there was on the smaller side (probably due to the race being scheduled later than the other entries in the series), but those who were there were ready to tackle the course and all of its challenges.

Right from the get go, Narcisi was out front. Being the trail running novice that he is, Eric N. wanted to get out in front to be able to clear the first ‘water hazard’ without having to worry about additional foot traffic. Eric L. went with him, and very quickly they had gapped the field.

But Eric L. knew it was going to be a grind, and he was content to sit and wait for his opportunity.

Eric N. kept pushing the pace up front, never really being able to put any distance on the pursuing Eric. At one point about 2 miles into the race the whole thing came to a stop anyway, as Eric N. rounded a corner only to find an enormous, angry and very aggressive German Shepherd sitting there waiting for him. It looked hungry, too. But where, O where, was the owner?

The hungry, evil animal barred its ferocious fangs and growled. It advanced a step, then stepped back. It clearly had the taste for man-flesh (was that a corner of a bib dangling from its jaw?) and it wanted more. Both Erics were standing there, unable to move anywhere. It seemed to last for hours but probably only lasted 20 seconds, if that. But that’s a long time to be standing there staring death in the face in the middle of a race.

Finally the frantic owner appeared, after Eric N. started growling back at the untamable beast. There can only be one Alpha in Big River. The dog was dragging the leash through the leaves, and the owner was desperately trying to catch the loose end. Just when it seemed like he never would, he successfully stomped on it just before Cujo made a death lunge. With the beast subdued, the race was back on.

Eric N. resumed his position up front and the pair duked it out for a couple more miles. About halfway through they came to the infamous Beaver Dam crossing, and not-so-sure footed Eric N. led the way and didn’t dip into the drink at all. Eric L. got a little creative with his choice of footing and soon found himself waist deep in beaver water. 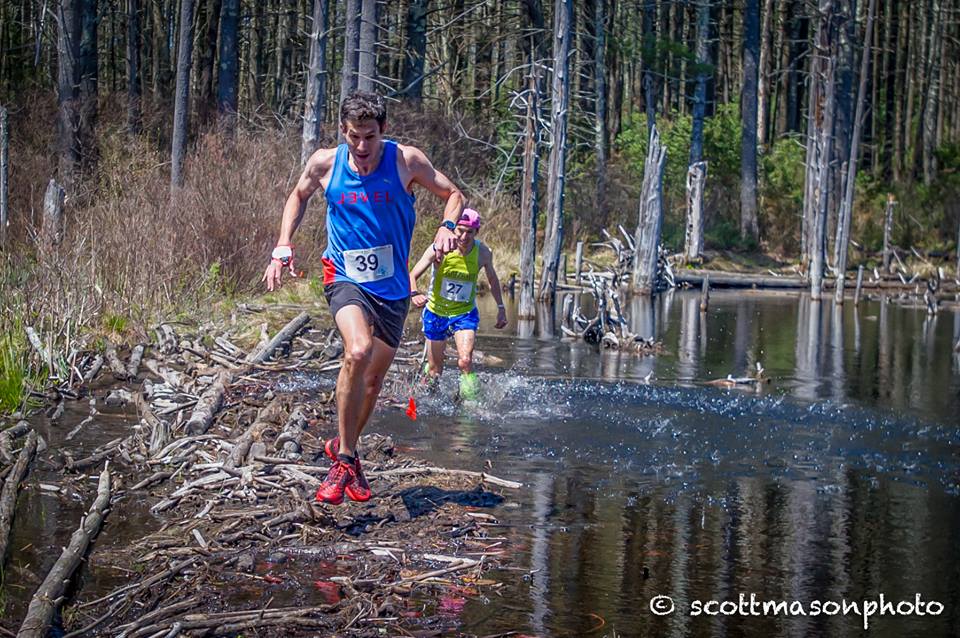 The crazy thing is though…it didn’t slow him down. Eric N. thought he had an opportunity to start building a gap but he couldn’t capitalize. Eric L. came charging right back and for another mile or so they battled like they had been. But just before 8 miles, Eric L. made his move. A couple miles earlier he attempted a surge to the front but Eric N. fought it off. This time, Eric N. did not, and that was pretty much the race right there. Eric N. fell off the proverbial cliff pretty quickly, which no doubt only escalated when he saw just how smoothly and effortlessly the Lonergan was pulling away from him. It was as if Lonergan was running on a smooth road and he was stuck running through some brushy thicket. In case you didn’t know, 5 miles is a long way to go on tired legs when you know the race is over. Narcisi found that out the hard way.

Only it wasn’t over. After a couple of miles of solo death crawling, with nobody in site in any direction, Narcisi unexpectedly came upon Lonergan…running back towards him! The poor guy had some minor navigation issues, and now it was a race again. Riiiiiiiiiiiiight.

The two figured out where to go rather quickly and then it was ‘game on’. But, once again, Narcisi got to have the broken pieces of his spirit crushed into a fine powder as he watch Lonergan effortlessly bound away. Again.

Mercifully, it was over. Lonergan got his hard-earned win, and Narcisi was able to find his way back to the finish without losing to Lonergan for a third time in the same race. The final score: 1:36:59 for Lonergan and 1:38:05 for Narcisi. Slowly reeling them in was Jonny Hammett, who rounded out the podium in 1:40:09.

Salt in the wound: first I had to watch Lonergan run away from me twice in the race, then the next day I get notified that he found another way to beat me. I yield! #trailrunning #notintheface #uncle #strava #bigriver

Only it wasn’t over for Narcisi. The next day he got served by Strava, when they informed him that Lonergan took the segment crown that he earned in the race. The few hours that Narcisi spent thinking he was the king of Venom Climb were precious, but there just wasn’t any stopping Lonergan that weekend. 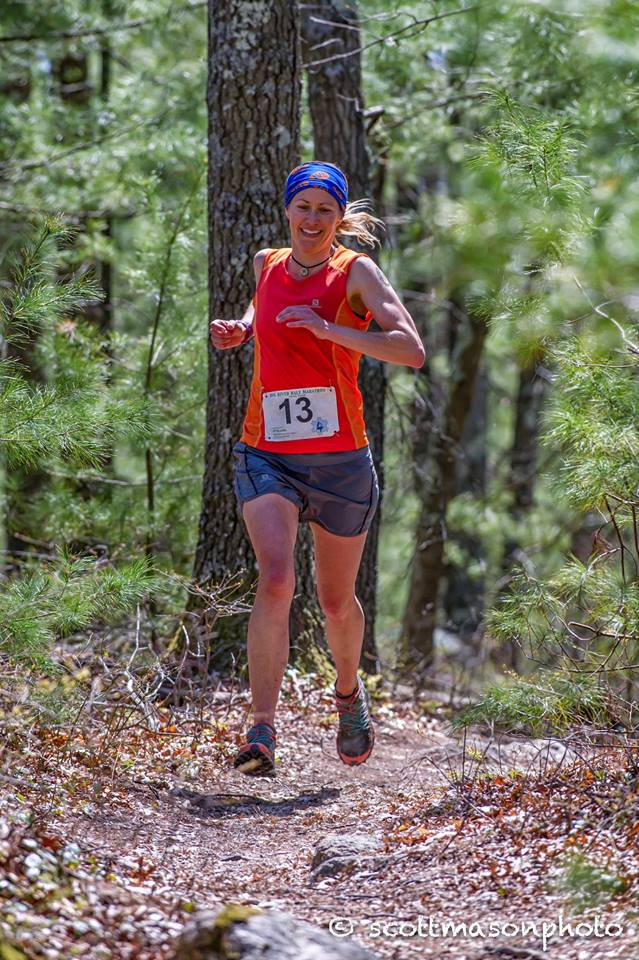 Leslie was once again all smiles. Courtesy of Scott Mason Photo.

There wasn’t any stopping Leslie O’Dell either. Despite having the remnants of the Boston Marathon floating around in her legs, she still ended up with her third win of the series (ran a 1:51:26). The only thing keeping her from winning the whole series was the fact that she missed the first two races! Leslie had this to say of her win:

“Big River was actually a lot tougher for me than I thought it would be. I started off a bit too quickly and realized by mile 2 that my legs were still junk from Boston. The uphills especially. I could really feel the fatigue. I was alone from mile 3.5 to 12.5, so that made it tough to actually “race”. I think that was a good thing, though, since I’m not fully recovered from Boston. I was able to reel it in and take it a little slower than I would have had I had some competition on my tail. I did not need to be going all out just yet.

“I thought Big River and the course were awesome. Such a beautiful place. It was a surprisingly hard course, too. I train on hills, but we don’t have a lot of places with rollers around here, so I’m actually weak on that. I can do long uphill runs, but those constant short ups and downs at Big River really beat me up.”

The 2015 edition of the race was plagued by course vandals who removed a whole lot of key markers. This year race director Mike Galoob was more vigilant and was out there keeping tabs on things as the race progressed. When you see Mike Galoob on a mountain bike, you can rest assured that he’s going to be able to cover a ton of ground very quickly and that the course is going to be fine. Mike had this to say about the race, and the course in particular:

“I liked this year’s course from a directing standpoint. It still featured some scenic and challenging terrain while having easier access points for me to double check course markings and race progress by mountain bike throughout the event. I was definitely concerned about tampering with the markers, but luckily I didn’t have to fix anything during my mid-race patrols. The overall series went well, although I always envision some changes and improvements. Every year is a little different, especially with the weather.”

Lastly, you can find out more about the race results and series scoring here. 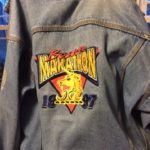 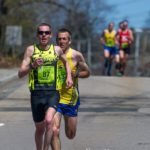