How slow was the 2016 Vermont City Marathon?

Originally posted on June 10, 2016 on Phidippides: A Data-Informed Marathoner’s Toolbox by John Stanton-Geddes

The 2016 edition of the Vermont City Marathon was stopped for the first time ever at 3 hours and 58 minutes into the race due to extreme heat. Anyone who had the pleasure of running and watching the event knows that it was a tough race. Many people had goal times they failed to achieve, as the primary focus given the conditions was finishing. So I wondered, how much did the weather conditions impact race times. Or to put it the other way, how much faster could you have run on a ‘normal’ VCM day (as if there was such a thing as a normal spring day in New England).To do this, I looked at the number of runners under different time thresholds (3 hrs, 3:30, 4:00, 4:30) in 2016, and then compared this to the simulated distribution of finishers under each time threshold based on data for the previous 5 years. The results are telling; the number of finishers under each time threshold in 2016 (the red line) is well lower than the expected distribution (blue area). 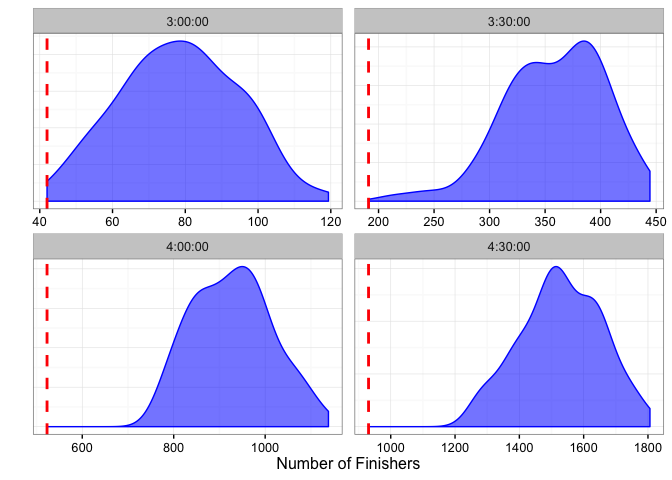 I grabbed hourly weather data from wunderground for each race day, and using this data I fit a statistical model using the temperature at 10am (2 hours into the race) to predict how much slower the average runner’s pace was in 2016, 81C at 10 am, then if the race had been at cooler temperatures.

I also noticed that the percent pace slowdown was less for faster runners, which makes sense as they spend less time out in the heat, and their generally higher marathon fitness may have allowed them to perform better given the conditions.

Hopefully this provides some consolation to runners out there that yes, they could have gone faster if it had been a cooler day! Better luck next time!

A 5K in Ski Boots

One Response to How slow was the 2016 Vermont City Marathon?