The New England Running Company hosted it’s very own Doughnut Dash back on June 3rd, and in this video you might be able to spot one local elite runner…if you can divert your eyes from Wes with his singlet tucked into his short shorts.

Yep, Olympic Trials qualifier and local blue collar grinder Dan Vassallo was on the line testing his mettle in a competitive eating run. How did it go?

@EJN_OnTheLevel Phil Goudie blew me out by like 30 seconds, may have broken 7:00. @Rocci1212 gave me a run for it in a Paul Pierce jersey.

Dan ended up second, in a shocker. Were those regulation donuts?! But it’s not all fun & games: they put on  more traditional events too. Shortly after the Doughnut Dash they once again held their 10 mile road race in Beverly:

Jon Lindenauer ran 54:41 and Brittany Boulanger ran a 1:08:07 for the wins. A little under 250 runners lined up for and finished this race, which is in its third year. 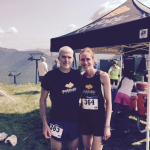