With just two small, competitive 10ks and a huge afterparty, the Western Mass Distance Project put on an event to remember last year at Dilboy Stadium. For the 2nd Edition, the Wolfpack teamed up with the Greater Boston Track Club to make the event even more memorable and exciting. Meet director Jason Ayr elected to move the races to Danehy Park and needless to say it was a good decision. The event doubled both in size and excitement with four sections of the 10k along with $6 entrees and free beer sampling for the afterparty. Of course the legion was on site to capture the highlights.

The women’s elite section was delayed by an oncoming thunderstorm, but thanks to GBTC meterologist Kevin Sheehan, the decision to wait for the wind and lightning to fade lead to a stellar race. Dirigo’s Erica Jesseman fronted the race with defending champ Laura Paulsen and Battle Road TC’s Holly Rees giving chase some 50-60 meters back. Rees would slowly close the gap from 6 laps in and was running stride for stride with Jesseman by the 5k mark, which they passed in 17’38. Rees would then break the race open for good and just keep rolling around the track, eventually claiming top honors in 35’24.70. Laura Paulsen would also pass Erica Jesseman for a 2nd place finish, running a solid 35’40.07. Jesseman would still hold on for a podium spot, finishing the 25 laps in 36’03.15. The top USATF-NE Master’s honor’s went to Sheri Piers (Dirigo), who ran an incredible 36’51 for 4th overall and Central Mass Strider Regina Loiacano, who finished in 38’55.

The men’s elites were equally as impressive. WMDP stud Amos Sang shot off from the gun and immediately settled into a rhythm of 70 second quarters with Cape Verde Olympian Ruben Sanca on his heels. After a 4’39 opening 1600m, Sang began to drop Sanca and continued on solo, dropping splits of 9’18 through 3200m and 14’35 through 5k. The going did get a little tough for Sang fighting the wind and humidity solo, but he cruised on in for a 29 minute, 37.01 second victory, breaking Louis Serafini’s meet record in the process. Ruben Sanca would later fall into a late race duel for 2nd place with Brooks teammate Matt Pelletier, which he won in 30’37.86 over Matty P’s 30’38.84.

There were also two open sections held before the elites kicked off. The top male and female amongst the open heats were Hurtin’ for Certain’s TJ Unger (33’56) and Greater Lowell’s Dina Nagdimunova (43’54). The fastest male master’s times were also ran in the open section, with Chad Carr, Jim Pawlicki, and Titus Mutinda taking the top honors there.

Full results of the meet via USATF-NE Fully Automatic Timing.

Apparently, YouTube didn’t think playing music at a track meet was cool, so they just had to mute the audio track of the men’s video. We’re working on restoring as much of it as possible. Regardless, the beats and heats will be back next summer and you won’t want to miss it! 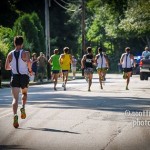 Bobby Doyle Summer Classic Will Once Again Feature a…