This article, written by Muddy, first appeared in our March/April 2014 magazine issue.

In the delightfully childish game of “Would You Rather,” an individual poses  a set of equivocal situations to which another person must choose which he would rather experience.  Usually mired in sophomoric, disgusting variables, the game does require at least some thought even if it’s simply deciding whether to eat a bowl of worms or drink a cup of turtle blood (sorry TNT’ers).

Recently at the dinner table while bemoaning my inability to break specific race time barriers,  my seven year old daughter started up an impromptu round of WYR by asking which goal I’d rather accomplish: break 17:00 in the 5K or 2:50 in the marathon? Can I choose both, please?

What about you?  If we played WYR openly and honestly what would you say? 5k or 26.2 PR?  That’s one hand of the game, here’s another: What style of renner are you? Let’s deal out the options and see what you’d choose.

Would You Rather…be a trail runner or road burner?

Each of these types of renners has his own aura of mystery and awe.  Trail runners, with their lonely explorations and off-the-beaten-path wanderings, can be tough to track down, visualize and fully comprehend. Are Ben Nephew and Christin Doneski even real people or are they mythical creatures, a la Bigfoot? Road burners, in contrast, are a bit more public. No place to hide on municipal streets and results for all to see on the internet. Everybody knows Sean Duncan and Lindsay Willard’s time for a standard 10k and variables such as steep inclines and treacherous footing are rarely up for consideration. However, it’s easier to maintain and monitor pacing on roads. Are you willing to sacrifice organized precision and running stat accuracy for awesome terrain and beautiful vistas?

Would You Rather…be a mountain goat  or  flatland gazelle?

Although we don’t have the luxury of western elevation, the northeast is not short on “ups.” There are so many goats around here (Josh Ferenc, Kevin Tilton, Leslie O’Dell, Jacqueline Shakar, etc.) that New England could be mistaken for a barnyard.  True MGs get off on getting up, and of course they do it with a smile. But don’t ignore or belie the “flatlanders.”  Toughness doesn’t occur on sloped hillsides alone. One can easily prove her grit by redlining on the track or setting the treadmill at 10.0 for 2.0 hours. The gazelles that are Sydney Fitzpatrick, Meagan Nedlo, Brian Harvey, and Pat Fullerton are as strong as they come. Both categories of runners have merit and brass ones (even the females).

Would You Rather…be a short distance specialist or long distance grinder?

Which type of discomfort do you enjoy: short, sharp, and acute or long, throbbing, and chronic? If you prefer short distance, you’re a sadistic freak.  Who in their right mind wants to run in oxygen debt nearly right off the line?  These people apparently are addicted to lactic acid and cannot get enough of it. Yet, the feeling of screaming down the backstretch or final straightaway is downright liberating and intoxicating. The long distance grinders, on the other hand, relish in their own special type of malaise and suffering…and praises too. What type of person chooses to run so much, for so long, and flirt so closely with lactate threshold that they need to eat while running? Don’t mistake the LD’s slower pace for lower effort.  Realize these beasts are wearing their bodies down at a still impressively fast pace, just over distances akin to the width of the state of Rhode Island!

Would You Rather…be a front runner or late surger?

Let’s shift away from running locations or race lengths and focus on strategy.   Setting a blistering pace, leading wire to wire—that’s bad ass. Case in point: Joan Benoit Samuelson.  Front running is even sweeter when you prove your naysayers wrong and cross the tape first. Tell me you don’t get chills when our beloved Joanie literally runs away with it and enters the stadium for the final lap in ‘84.  At the same time, it can be just as impressive to be a sit and kick racer.  You know the type who waits and waits and waits and then finally rips your heart out in the last 100.  Billy Mills and his go-for-broke finishing kick at the 1964 Olympics in the 10,000m finals is a great example. It is absolutely awful to be dripping blood as the tape comes into focus only to have a shark snap your legs off with his jaws of victory.

No matter which WYRs you make with regard to your running, you can still get fast, have fun, and turn-in PRs. The fun of it is that you can be all of these types; just switch it up from race to race. As I remind my children daily it doesn’t matter what you do or decide to be in life—just be awesome at it!

To read more from the March/April 2014 issue, click here.

Articles, Commentary Would You Rather…
« Previous Story 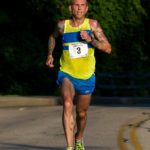 7 of the Best Pool Running Workouts for Injured…