CAPE ELIZABETH, Maine (August 6, 2016) – Maine native Ben True became the first American to win the TD Beach to Beacon 10K and Mary Keitany of Kenya shattered the course record in the women’s race on Saturday in the 19th edition of the iconic summer road in Cape Elizabeth, Maine.

True (28:16), still smarting after missing the Rio Olympics by less than a half second last month, grabbed a commanding lead over the final mile to end an 18-year streak of East African winners. Dathan Ritzenhein (28:27) put an exclamation point on the American breakthrough with a strong second-place finish, while Kenyan track speedster William Malel Sitonik (28:32) rounded out the top three.

In the Maine resident races, Michelle Lilienthal, 34, of Portland (34:53), the 2014 champ, regained her title with a dominant performance while 22-year-old Jesse Orach, (31:31) of Gorham, a University of Maine distance runner, won the wide open men’s race after nabbing bib number #5891 just under the transfer deadline.

The world-class athletes were among 6,332 runners from 15 countries, 43 states and more than 265 Maine cities and towns who finished the winding, rolling, often breathtaking 6.2-mile coastal course under partly cloudy and increasingly humid conditions. A light sea breeze was welcomed by the runners, along with the enthusiasm and cheers from thousands of spectators who lined the course and filled the bleachers, located for the first time on both sides of the finish area.

The TD Beach to Beacon (www.beach2beacon.org) is one of America’s iconic 10K road races, known for attracting the world’s best runners but also for its top-notch organization, community support and the involvement of Olympic gold medalist and Maine native Joan Benoit Samuelson, who founded the race in 1998 and continues to inspire runners both in Maine and globally.

The 2016 race beneficiary is My Place Teen Center (MPTC), a free, year-round, after-school youth development program for kids in Greater Portland, which receives a $30,000 donation from the TD Charitable Foundation, the charitable giving arm of TD Bank, America’s Most Convenient Bank®. TD Bank has now donated $570,000 to Maine charities over the history of the race. MPTC also is benefitting from significant fundraising opportunities now and in the future as well as publicity and awareness through its association with the race.

With a separate $23,000 prize purse for American men and women that debuted last year available again, the TD Beach to Beacon again attracted a top field of U.S. distance runners, along with the traditional strong core of international athletes.

Ben True, 30, who grew up in North Yarmouth, Maine and now lives and trains in Hanover, N.H., was considered one of the race favorites, but few imagined a 1-2 American finish or that seven of the top 10 men would be Americans.

Dathan Ritzenhein, 33, a two-time U.S. Olympian who set a personal best 28:12 at the B.A.A. 10K in June, pushed the pace early, followed by a handful of other Americans. A contingent of Kenyans – William Malel Sitonik, two-time champ and Olympic medalist Micah Kogo and Daniel Salel, who finished third last year – eventually moved into the lead pack with True, behind Ritzenhein. Near Mile 5, the pack had dwindled to three when True made a move on Sitonik to take the lead for good.

A $2,500 Course Record Bonus was also available to all runners on Saturday – but went only to one athlete: the overpowering Mary Keitany.

Keitany, hot off a course-record setting victory one week ago at the Quad-City Times Bix 7 in Iowa, picked up where she left off by again dominating the second half of the race. She ran in a lead pack with defending champion Wude Ayalew and Kenyan Caroline Chepkoech-Kipki until they passed under the American flag arch just past the mid-point of the race, when Keitany began to steadily pull away. By the time she reached Fort Williams, she was nearly a minute ahead of Ayalew.

Keitany, one of the world’s best marathoners with multiple wins at the NYC and London marathons, broke the course record 30:59 set by Lineth Chepkurui of Kenya in 2010, a race in which Ayalew also finished second. Emily Sisson, the first American, finished fourth overall, followed by a trio of Americans: Aliphine Tuliamuk (32:24), Sara Hall (32:45) and Jordan Hasay (33:04), before Kenyan Gladys Yator (33:15) and Americans Maddie Van Beek (33:22) and Elaina Balouris (33:49) rounded out the top 10.

In the Maine Resident category, Lilienthal set a course record 33:39 in winning the 2014 race following her move to Maine. She missed last year’s race, but is now 2-for-2 with a convincing win on Saturday. Sheri Piers, 45, of Falmouth, a three-time champ, placed second (35:59) and also won the Masters title for the third year in a row. Defending champion Erica Jesseman, 27, of Scarborough, a two-time champ, fell off the pace and finished third.

On the men’s side, Orach, a recent University of Maine graduate who excelled in track and cross country, was only in the race because he managed to secure a bib transfer just before the deadline. It turned out to be a $1,000 stroke of luck. Liam Simpson, 20, of Cape Elizabeth (32:10) placed second and Spencer McElwain, 27, of Portland (32:15) took third.

Also, in the IDEXX Business to Business Maine Challenge, pitting teams of athletes from a number of New England corporations and businesses, it was UNUM again winning first place in the mixed team division followed by TD Bank. L.L. Bean won the men’s division, Maine Health the women’s division and IDEXX won in the first-timer 10K division.

The Johnny Kelley Award for the oldest finisher went to 88-year-old Nora Stetson of Portland.  The 2016 Volunteer of the Year Award was awarded earlier this week to to Paul and Lisa Simonsen of Buxton, who help out in the Medical Tent.

Also, on Friday, winners of the inaugural TD Beach to Beach High School Mile were Tia Tardy of Lincoln and John Hassett of Castine.

The events of the day moved Race Founder Joan Benoit Samuelson, winner of the first Olympic women’s marathon in 1984 – almost 32 years ago to the day. Standing near the finish line greeting the back-of-the-pack runners as is her tradition, Samuelson’s eyes glistened with emotion as she recounted what had just transpired.

“It was such an emotional day with our first Elite Women’s Start shining the light on the women and then to see Mary perform so brilliantly,” Samuelson said. “And then to watch Ben make us all proud with a truly historic run and just now to finish the race with Tom Carll and his son Shawn, who ran the race wearing the bib of his mother, Sherry, a legacy runner who passed away last week. This race has always been about the stories, at the front of the pack and at the back. So much inspiration, year after year.”

Sherry Carll of Gray, 69, a passionate runner who insisted on keeping her 18-race streak intact even though she could barely move, was buried in a TD Beach to Beacon runner shirt. She and Tom, 74, who had open heart surgery earlier this year, were married more than 50 years.

The TD Beach to Beacon route follows the same coastal roads Samuelson trained on in Cape Elizabeth. The race is a fulfillment of her dream to bring a top international road race to Maine. With her reputation, plus top-notch organization and strong community support, the TD Beach to Beach is known and appreciated as a world-class event with small-town charm. The race debuted in 1998 with 2,408 runners crossing the finish line. Online registration now closes in less than four minutes.

The TD Beach to Beacon begins near the Crescent Beach State Park entrance on Route 77 in Cape Elizabeth and winds along tree-lined roads and past dramatic ocean vistas before ending in Fort Williams Park near Portland Head Light, the most photographed lighthouse in America.

The TD Beach to Beacon is directed by Dave McGillivray of DMSE Sports (www.dmsesports.com), who has organized every TD Bank Beach to Beacon and also directs the B.A.A Boston Marathon and other events around the world. 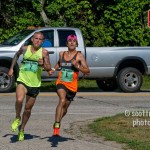