5 Must-Dos the Night Before for a Race

Below is a guest post by Dan Chabert from Runnerclick.com. What do you think? Do you agree with these pre-race tips?

You’ve been preparing and doing all of the right things for weeks now, and finally, your race is just a day away. The final twenty-four hours and even forty-eight hours before a race could have a great impact on your success or failure. The night before, even if this isn’t your first rodeo, can be nerve-wracking and stressful. Your training routine, diet, exercise, and mindset are all important. The night before your race, your diet and mindset become the most important aspects of your preparation. Your race has almost begun, but you’re not off the hook yet. Here are 5 must-dos for the night before a race.

1. Do a final mini-workout. When race week hits, you’ve got to slow down on your training in the sense that you’re cutting down on miles to allow your body to store up its energy. Two days before your race, you should allow yourself a short easy run, and nothing that hits you hard. The day and night before, allow yourself one final mini-workout. Think a short warm-up type run for less than twenty minutes. You should run no more than half of what you’d run on a typical easy day.

2. Fuel up. Feast on pasta and bread. You might’ve heard this from some people. And while it’s tempting to stock up on carbs since you’re going to be burning them anyway, flooding your body with too many carbs can shock your digestive system. It’s just not used to processing that much, and chances are you’ll end up with a stomach ache, or worse, digestive issues during the race. Instead, you should be stocking up on carbs as early as a few days before the race. The night before the race, get an adequate amount of carbs in, enough so that you feel full but not uncomfortable when you’re finished with dinner. The same goes for water. Getting too much water in is going to make you feel bloated, and it’s also going to dilute your electrolytes, minerals necessary for peak muscle performance. Drink a normal amount of water to avoid this issue as well as cramping or muscle weakness.

3. Don’t shake things up. It may be tempting to do all sorts of things you never do just because they might make race day better. You could prepare a special dinner you’ve never had before or you could test out a new energy supplement. There are all sorts of fancy tips out there that promise out-of-this-world results. Most of them are too good to be true. Instead of making the night before your race special, stick to your routine. Do what you usually do, no frills whatsoever.

4. Visualize your success. Muhammed Ali was known for thinking “I am the greatest,” and Tiger Woods has been visualizing since his teens. Visualization might seem silly, but it’s actually training the brain for an actual performance in the same way you’ve been training your body. If you know anything about running, you know how much of it depends on mental endurance and strength. Go through race day in your head. Picture yourself putting your number on, walking up to the beginning of the race track, lining up, and taking off. Picture yourself counting down the miles and pushing through pain or unexpected problems. Picture yourself running the fastest you’ve ever run this distance before. Whatever success looks like to you on race day, imagine it happening. Then make it happen the next day.

You’ve been training vigorously for weeks or even months now, so it can be difficult to look at a night-before routine that involves so little exercise or effort. The night before, you’re better off sticking to your usual routine than mixing things up. Get your body moving, but don’t work out too hard. Bulk up your dinner with carbs, but don’t overeat or overdrink. Finally, let your mind take over. Really visualize what success means to you. Anyone can prepare their body for a race, but true champions know just how important mental preparation can be. It could be the difference between adding or slicing off seconds or quitting or finishing the race. About the Author Writing from Copenhagen, Denmark, Dan is an entrepreneur, husband and ultramarathon distance runner. He spends most of his time on runnerclick.com and he has been featured on runner blogs all over the world. 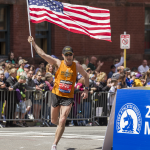