The New Hampshire 10 Miler served as the midway point of the 2016 Club New England Grand Prix slate and we saw some familiar faces dominate the roads. It was another scorcher out there temperature-wise, but the field still posted some impressive results over a challenging elevation profile.

After opening up the race at an honest clip, a pack consisting of John Raneri (Brooks), Amos Sang (Western Mass Distance Project), Ruben Sanca (Brooks/Whirlaway), Brian Harvey (Boston Athletic Association), Teage O’Connor (Green Mountain Athletic Association), and 8x D3 All-American Bijan Mazaheri separated themselves from the rest of the field. The heat and hills would take their toll and runners would drop off one by one until the 5 mile mark, where Raneri, Sang, and Harvey were the clear front runners. Raneri would pull off the course shortly after and Amos Sang appeared to have the race wrapped up. But Brian Harvey proved to be the much stronger uphill runner and closed what seemed to be race deciding gaps as Amos opened them on the downhills. The cat and mouse game raged on straight until a flat section before the final big hill in the ninth mile and the Abilene Christian National Champ had opened up a gap too big for Harvey to close on the final hill. Sang would cruise the last downhill and re-enter Massabesic Reservoir as the victor, breaking the tape in 50 and a half minutes. His performance bested his own event record from 2014 by 9 seconds. Harvey would finish close behind in 50’39, matching Sang’s previous event record. Sanca, Mazaheri, and O’Connor would round out the top five, finishing in 51’33, 51’56, and 53’05 respectively.

On the women’s side, things were broken open early as Heather Cappello (Boston Athletic Association) ran her own race from the gun. Heather had a whole minute staple on 2nd place runner Erica Jesseman (Dirigo) at the half way point, blazing the first 5 miles in 28’43. Cappello would race the men surrounding her over the later half of the race and cruise in to a 58 minute, 13 second finish, narrowly off of Jesseman’s event record of 57’47 from just last year on a much cooler day to race. After being paced through a modest opening 5 miles by her fiancee, Heartbreaker Rachel Sorna would hammer past Jesseman and claim the 2nd position with a time of 59’29. Erica would hold onto the bronze medal spot with a 60’41. The BAA Unicorns would round out the top five for the women as Rachel Hyland (61’32) and Emma Spencer (62’08) posted strong finishes to help guide their open team to victory over a solid Craft Concept Racing squad. The BAA would also claim the men’s team title with the Western Mass Distance Project as the runner up.

Check out the full results courtesy of Millennium Timing. 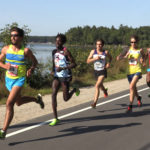