It was the third bi-weekly New England Grand Prix event and also the third muggy day for racing as the series made it’s 5th stop at Nagog Park in Acton, MA. This event featured a 20k race over some hilly, but peaceful back roads.

On the men’s side, some familiar names fronted the race, but the concensus was to run goal marathon pace rather than beat each other into the ground. Brian Harvey (BAA), Louis Serafini (Heartbreakers), Dan Vassallo (Central Mass), and Teage O’Connor ran together through the opening miles, splitting a conservative 16’24 5k to open it up. Harvey, Serafini, and Vassallo would slowly pull away from O’Connor from that point on. By the seven mile mark, Harvey and Serafini were starting to separate from Vassallo as they cruised through in 36’55. Harvey would then drop the rolling 5’20s down 5-10 seconds per mile and break the race open, winning in a time of 65 minutes, 15 seconds. Serafini and Vassallo would finish 2nd and 3rd – their finish times went 66’03 and 66’17 respectively. Our winner Brian also lead the B.A.A. Unicorn Men to a solid open team victory in a close battle over Whirlaway Racing. Harvey was backed by Brad Mish, Jason Reilly, now fast 50 year old Peter Hammer, and Dylan Villescas – all who placed in the top 20 overall.

The women’s race, on the other hand, was a tight battle for time over two of New England’s recent standouts. Rachel Sorna (Heartbreakers) and Hillary Dionne (Craft Concept Racing) would separate themselves from the rest of the women early on and already hold a 50 second lead on then 3rd place female Kelly Whitaker. Sorna and Dionne would trade off through the next five miles after that until Sorna starting surging away just before the nine mile mark; a surge Dionne wouldn’t quite be able to match. Rachel would break the tape for the women in 74’13, which was a little under a minute quicker than 2nd place Hillary Dionne’s 75’08 for 2nd. Hillary’s Craft teammate Kaitlin Sheedy would claim the 3rd position after moving her way up the field for most of the race. Sheedy blazed the hilly 20k course in 79’31 gun time. The other Craft ladies finished close enough behind Sheedy to capture a dominant women’s team title. Though passed by Leslie O’Dell (CMS) late in the race and just missing out on the master’s title, Diana Bowser rounded out Craft’s dominant team as their third finisher.

Our legion rep Mike Giberti traversed parts of the course and other side streets via bike to provide some coverage. Check out the resulting first-hand video from the start, 5k, 7 mile, and finish: 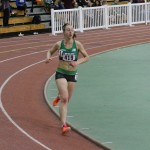