The USATF NE mountain series wrapped up last weekend at Bretton Woods which hosted the North American Fell Running championships over a 7-8 mile course with 2,500’ of climb and descent.

The series was scored in a “best 6 of 8” format. In all 230 men and 111 women took part in the series. In addition 112 runners attained “Goat” status by completing 6 or more of the 8 races. This entitles them to a lottery by-pass for the 2017 Mt Washington road race.

On the women’s side Leslie O’Dell (CMS) won her second consecutive title, and took her first masters title, amassing a near perfect 597.36 points. Jamie Woolsey (aR) kept it close all year finishing in second place despite having never run a mountain race prior to this year.

CMS individuals also had success in the age groups. Tim Van Orden and Todd Callaghan took 1st and 2nd place in the masters age group. In the senior age group CMS runners took 5 of the top 11 spots including 1st and 2nd place by Dave Dunham and Ed Sheldon respectively.

Age Groups (top 3) in each category are listed below. 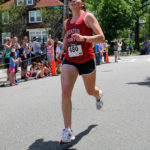