Steve Polito and Annmarie Tuxbury both earned the wins on Sunday at the Old Fashioned 10 Miler in Foxborough. Stephen fended off early race pressure from Bobby Allen and broke the tape in 55:14.99.

Annmarie Tuxbury successfully defended her title with a 1:02:37.57, and comfortably led over runner up Leslie O’Dell (you may have seen her on this site from time to time).

By mile 7, Steve Polito was in control:

Also out in front of the field was Matthew Corr, looking highly fashionable in the process:

Then along came defending champ Annmarie Tuxbury, well on her way to another ‘W’:

Full results can be found over at elitefeats.com. Thanks to Fiona and Jen for the pics/updates! 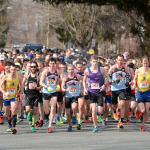 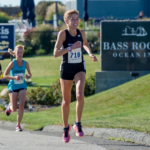