Back in grade school math, we were taught that a google (lower case) was one followed by a hundred zeroes, and a googleplex (again lower case) was one followed by a google of zeros. For decades that stuck with me in the category of entirely useless knowledge, until Google became the Brain of the Universe, and the Googleplex its home. Who knew? And what other useless knowledge will come back to haunt us in decades to come?

You’ll fault my math, but on that theme I’m calling this year’s Boston, marathon number twenty-six, the Maraplex, a marathon of marathons. I know that not only is it not a one followed by twenty-six zeroes of marathons, which is, I believe, one hundred septillion, but really, even if the unit of measure were an angstrom rather than a marathon, that would make for a race of about ten light years (if I’ve calculated correctly, feel free to check my calculations at the end of this column). Further, I know it shouldn’t just be twenty six, but in fact twenty six point two marathons, so technically I’d have to run the first five and a quarter miles of my next one to reach the Plex Point. Be gone, you people more OCD than I, this was my Maraplex, and don’t you know I’m riding on the Maraplex express, it’s taking me to Maraplex. All aboard, and enough of that silliness.

The main point here is that I managed to improve my record to twenty-five for twenty-six on the statistic of finishing these things standing up (which wasn’t a foregone conclusion this time), and despite the unusual circumstance of not yet having a qualifier for next year’s race going in, I did get my ticket punched for next year’s ball.

To recap for those who are new to this train, it’s been a tough year. Injuries begat bad training and somehow the Mojo level fell off a cliff. Having cancelled last fall’s race (New York), this year’s Boston found me planted in an early corral (thanks to my previous fall’s qualifier) among a crowd I no longer resembled, and facing not quite a do-or-die, but the uncomfortable reality that if I didn’t do, I’d have to re-do, and from here on out it only gets hotter and harder. Hotter and harder were not pleasant thoughts when this one – in April – was already hot. And hard.

Of course, as noted, I did. And afterward, my local buds all scoffed at my pre-race doubts since the results were, when graphed against the Bell Curve of Running Humanity, not shabby. But omitting the year I ran Boston on forty-two days of training while recovering from that famed foot surgery (and also omitting the fun, unofficial ‘marathons’), this was a Personal Worst for Boston, and ahead of only my very first marathon for All Time Personal Worst.

Fortunately, the Gods of Age Grouping award me an extra ten minutes for next year’s qualifier, a minor concession for the fact that the Ultimate End will then be one year nearer (but that is, after all, our job: to spit in the face of that Ultimate End and do what we can with what we’ve got for so long as we’ve got it). And with that extra ten minutes, there was no doubt in my mind. This was not a race, it was a long run, I was going to run it how my body wanted to run it, and I was going to enjoy it, and just get the qualifier. If someone offered me a beer, I told myself, this time I might just take it.

No worries. Run comfortably. Enjoy it.

Yeah, that lasted for about an hour. Remember, it was hot? Remember, I came in pretty lousy shape, relative to where I should have been?

I don’t pay a coach, and that Monday was one of the reasons why. Had I paid a coach, I’d have a lot of explaining to do, and I just don’t have time for that; it’s supposed to be fun. My Ghost Coach would have crushed me for what was probably the worst-executed marathon of my career. Without exception, every five kilometers clicked in at a pace slower than the five previous. Even coming down off the hills, progress grew slower. And slower. And slower.

To be fair, late in the race, some of that was due to the judicious use of walk breaks. It was a stated goal to improve that vertical finishing percentage. And by those late miles, it was pretty clear that a finishing time variation of a few minutes just didn’t matter. Nobody’s going to ooh and ah because you landed at something-colon-twenty-one rather than twenty-two. All this called for was a time to slap on my entry in September. There’ll be chances to notch a better seeding later. 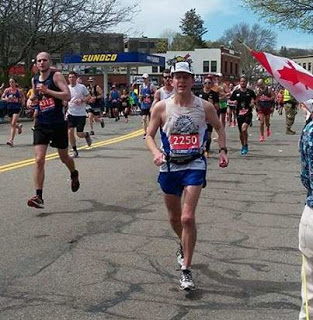 This wasn’t the Bake Fest of 2012, when the thermostat hit the eighties, but it felt like it was on its way. It was noted that we hit seventy-four, and it was also noted that the brutal day of the US Olympic Trials in Los Angeles a year back also hit seventy four. With the sun dial turned up to eleven for the first two hours of the race, once again, like 2012, they were dropping like flies. Once again, racers were walking by the time we hit Framingham. Once again, runners were laid out flat on the sides of the course, usually being attended to, but in a few cases, seemingly frighteningly alone. It was with great relief that I heard of no medical tragedies.

Like 2012, every table, every bottle, every ice bag, every sprayer (including one open hydrant we all agreed was a bit shockingly cold and far more soaking than we expected). By the time Dearest Spouse captured my withered visage at Newton Lower Falls, you could have squeezed me to water a small third world village. And like 2012, that soaking did manage to keep the core temperature under control while the rest of the body unwound, slower, slower, slower.

In the end, it just doesn’t matter. Someday I will fail to re-qualify, or I will fail to finish, and my string of consecutive Boston Marathons will end. Face it. I’ll never make fifty like one man achieved this year unless I run it till I’m ninety-three. Even twenty-five is highly unlikely. The last one is going to happen, and when it does, I’ll have had a good run, and there will be no shame. So soak it up.

Around mile twelve it occurred to me that this was Boston Number Eleven and I’d never gone in for the fun of the Wellesley scream tunnel. Soak it up. Plant a few pecks on a few cheeks!

Around mile fifteen it occurred to me that I run past Dearest Spouse each year with a shout and a wave, but nothing more. Plant a big one, just don’t twist the knee in the process!

Around mile twenty four it occurred to me that, dead tired or not, I’d never really played the crowd. Pump those arms! Get ‘em yelling even louder! It really works! 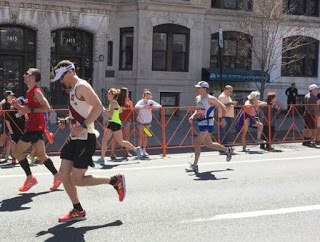 Soak it up. With three miles to go and forty-six minutes left to qualify, take a couple of walks so as to be coherent when Boylston rolls around. Really, if I couldn’t cover those last three in that amount of time, I didn’t deserve to be invited back

Amazingly, around that point, my local club Highland City Strider buds caught sight of my valiant struggle and snapped a picture that made my stride appear deceptively competent. It lies. I was far past burnt toast. It was agonizing, really from about seventeen onward.

After one last stroll coming out of the Mass Ave underpass, I slogged nine-plus pace up Hereford and onto the holiest stretch of running on the planet. I believe it took three or four hours after that to cover those last four blocks. 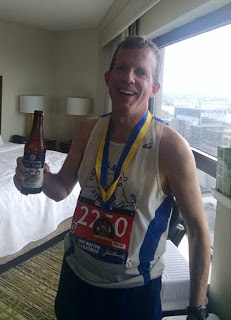 No brew ever tastes so good. (With annual thanks to the Amazing Squannacook River Runners for their Amazing Annual Boston Bash!).

You Can’t Make This Stuff Up Department

Thirty thousand runners, and it’s uncanny. For the third year in a row, as I hopped on the bus to the Athlete’s Village, a random friend coming from a completely different direction hopped on right behind me. Even more amazing, it was the same guy as it was two years ago, my bud Joe from my Greater Boston Days. It’s like we planned it. Company at the Village makes it a lot more fun.

While there, we tracked down first-timer Syracuse Daniel whom I’d met at Mohawk Hudson and have kept up with on his run-up to Boston. Unfortunately, the heat beat him up at nineteen. Chalk it up to experience, no shame considering what we were up against. There will be plenty more.

And on the topic of Mohawk Hudson, continuing the spree of ‘you’ve got to be kidding me’ moments, Jan, whom I’d met at M-H and realized then that I’d previously met him on the trails of the Adirondacks, and subsequently ran into again at the starting corrals of last year’s Boston, ran up alongside at mile nine and somehow managed to pick me out of the crowd by name. How?

As did CMS-teammate Eric, who I wasn’t even sure was running, but who sidled past at twenty-five and called out through my late-race stupor. Through through the oddities of chip timing, he ended up a few seconds behind me in the final tally, but photographic evidence would show that what he lost in seconds, he made up in on-course brews. Well done. 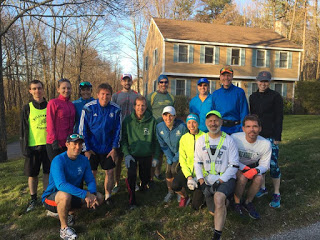 I insist on getting out the day after for a few miles, wicked pissah slow, to keep from turning into a rubber band. That I did Tuesday morn, which, mind you, was a perfect chilly day for a marathon, but Nooo… we had to hold it on Monday… Before I went out, I foolishly posted to my club-mates asking if they were planning to get together that evening. By the time I came back in, someone chimed in to host, and next thing you know, more than a dozen were coming. So, yeah, I um, did a double the day after, new record, nearly eight miles total.

But the best fun bit to come out of the day had to be from my Highland City Striders. The reason they caught me at twenty-three was because they were volunteering and had been assigned street crossing duty, but they were told to shut down the crossing during the most crowded period of the race. When they were in action, some enterprising soul captured their efforts in time-lapse, and the unique method used this year to get fans across the course literally went viral. At last count, the video has been picked up my multiple running magazines and has racked up over one-point-eight MILLION views.  Check it out here, it’s worth watching. Mesmerizing, in fact. I have to say, I’ve never known anyone who’s gone viral before! And the funny thing is that I noticed the boxes painted (with tape) on the street, but since the crossings were shut down when I came through, I had no idea what they were for.

Follow Gary’s second lap on his blog… The Second Lap.