This profile of Rob Gomez first appeared in our Jan/Feb 2013 magazine issue. 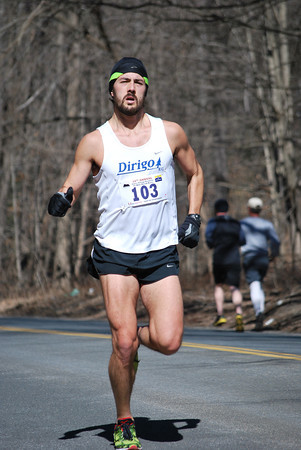 Running Intangibles Training Philosophy: I try to find a happy balance between running and the rest of my life. I know that sounds like something out of the latest issue of Runner’s World, but I really find it makes everything more enjoyable. In the second half of 2010 I set my sights on one thing and one thing only: getting to the Olympic Trials in 2012. I chose Houston 2011 as my qualifying race and spent all of six months devoted to the task. What I learned, along with the fact that six months is too long of a training cycle, is that focusing too much on running alone just sucks the fun out of everything, even running itself. I lost contact with a lot of friends and didn’t enjoy the things I love. I ended up running a decent time (2:23:02) but the PMD (post-marathon depression) really set in later that night when I was sitting alone at a Cheesecake Factory in some nondescript suburb. I came to the conclusion that night that completely selling out for a particular race is just not my thing. I’ll never be able to find out what happens if I do everything perfectly right with my training, nutrition, and recovery, but that’s okay by me.

Prerace Ritual: I know some folks use the last few minutes before the gun goes off to focus on the race ahead and channel their nerves and energy productively. I used to do that in college and I puked my guts out before each XC race because of it. Nowadays I’m hamming it up with everyone during that time. I usually know many of the guys (and girls) toeing the start line, especially in local races, so I use it as a chance to catch up, laugh, and appreciate how awesome it is to be a part of such an incredible community of folks.

Career High/Lowlights: Back in December 2006, when I was 210lbs and several years removed from competitive running, my best friend Jeff Sprague urged me to go on a run with him. 4 miles and 32 minutes later I was completely gassed, and over a Chinese buffet dinner we decided to train for the 2007 Chicago Marathon. Despite the heat that year I was able to piece together a 3:04, and then the running bug set in.

Long term: I’d like to give ultramarathoning a try before my legs start to quit on me. A trail marathon would be pretty cool too.

Your Proudest Moment: Again, this might sound corny, but any time I help someone else achieve his or her running goals is when I’m the proudest. Getting Cam Nadeau into running for the first time in the fall of 2010 while I was the Biddeford High School XC coach and then seeing him become Class A state champion in 2012 was awesome; watching my friends I regularly run with and talk training with set PR’s is a cool feeling; and seeing the huge smile on my daughter’s face when she finishes a fun run is by far the best feeling of all.

Best Distance Runner of All Time: I’m not the biggest running history junkie so I don’t have a strong opinion on the matter, but for my money it’s gotta be Pheidippides. I mean, the guy died because he ran so hard, and they went and essentially named a specific race distance after him.

Oddest Thing That’s Ever Happened to You on a Run: On a trail run in Mt. Blue State Park nearly a dozen years ago I almost faceplanted into the ass of a bull moose.