As we prepare for the first anniversary of the Boston Marathon tragedy, Level Renner is re-releasing the memorials and reflections of the running community written one year ago in the wake of the 117th running (these letters from readers were originally published in our May/June 2013 issue). Our intention is to pay proper respect and tribute to the events of last year’s race. We want nothing more than to handle the tragedy with appropriateness and tact. Because we see ourselves as an open platform for runners, this series is an expression of our audience’s thoughts from a year ago.  Thus, in the following pages, you will find an array of responses.  Some are angry, some are numb, most are just plain sad.  But some offer hope. Most show the strength and resolve of our community. The goal of this series is to remember and pay proper respect to the horrific events of April 15, 2013.  We will release one post per day in this series in the days leading up to the marathon.

Below is the eighth installment of a twelve part series. Jordan Vance wrote this reflection.

My parents, my brother’s girlfriend, and I tried waiting for lunch at the Arlington end of Boylston Street after I had finished my race (which was a fantastic first Boston experience with a time that was pretty much what I predicted). I decided I was too cold, shivering, and wet to stick around waiting for a table, so we decided to walk back to my apartment where I could shower, get warm, and change into something that wasn’t pre-race pajamas over wet running clothes. When I got out of the shower, I got a text from my brother in the Hancock Tower telling me about the explosions. And with that, the events of the day overwhelmed the day’s event.

I was home when it happened. I am uninjured. But I am still shaken. People’s lives torn asunder, just an hour or so after I’d left the area. I’ve alternated between exhaustion and sadness. I can’t continue to watch the news coverage, but I can’t not watch it; it’s all just so tragic and sad and surreal and very, very real. 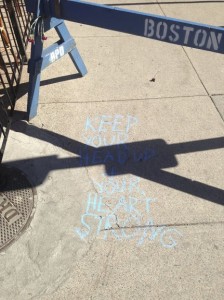 I walked through Government Center Tuesday night, on my way to meet Gregory Soutiea for a beer, past what seemed like the entire Cambridge, MA SWAT team, past Army EOD trucks, all in a hope to get back to some sense of normalcy. I was on the phone with my dad, and he asked, as so many have, if we, if I, will ever feel safe again. And the truth is I feel no less safe this week than I did Sunday, or Monday as I was running. Small minded people with guns and bombs and terrible thoughts in their heads and hearts are hard to predict and hard to stop. Like so many acts meant to instill us with terror, it appears at once both targeted and random: targeted towards society as a whole but random in its selection of victims. I have been incredibly sad since the race, often on the verge of tears (both of pride in all the good that everyone performed in the immediate and not so immediate aftermath and of sadness for the lives ruined and lost and forever changed).