Activities to Keep You Fit

Being injured sucks! I’ve found that just as there is no secret to training (train harder and you’ll get better), there is no secret to avoiding injury. As depressing as it sounds, if you run enough you will mostly likely get injured. I’ve been running for over 35 years and have accumulated more than 800 injuries and missed 1,600 days along the way. I can’t say I’ve learned much from all of those lost days other than I hate missing even one of them.

Being injured is a lonely proposition. Most, if not all, of my friends are runners and it just isn’t comfortable talking about running with an injured comrade. Most of my “social” time is during a training run so without the daily fix I find that I end up being stuck talking to myself a lot. This double-whammy of not getting out running and also being cut-off from a part of my life adds gloominess to my day. One way around this would be getting others to join me in alternative exercise (not easy to do). Another would be to bike alongside my running buddies. It wouldn’t be a workout but it would fulfill the missing social interaction.

I’ve found that almost always there is some kind of alternative exercise that can be used to stay fit during downtime. Each of them has pros and cons and all require MUCH more mental focus and time to get the equivalent of a normal running workout. For me the best plan has been to mix multiple alternative exercises and split them up during the day. That way I can maintain the high focus needed to get a “real” workout during the mindless hours on a stationary bike or running in the water for hours and not really getting anywhere. If you enjoy running on a treadmill then you already have the mental capability to do most alternative exercises. The ones I’ve found most effective are water running, biking, ElliptiGo, rowing, Nordic track, and Elliptical.

Water running is the closest thing to real running without the impact of it. I only do this outdoors now as doing this in a pool is just torture. Although saying that, at one point I was putting in two 90 minute sessions in a pool that was so small a “lap” took less than one minute. I use an Aqua Jogger belt which helps you float in a running position.

You have to be in water deep enough that you are not touching bottom and just run like you would on dry land. I use a wet suit for warmth (October in Stiles Pond can be downright uncomfortable), special water running shoes that add resistance, and webbed gloves to add arm resistance. With all that in place you can manage a fairly decent workout. I’ve got two extra Aqua Joggers and once in a while have been able to con others into a long water run with me. One time Dan Verrington and the Quintal Brothers (Dave and Mike) joined me for a 3 hour run at Stiles. We broke it up with “sprints” to some of the docks and a lot of chatter along the way. It was almost like a regular Sunday run! 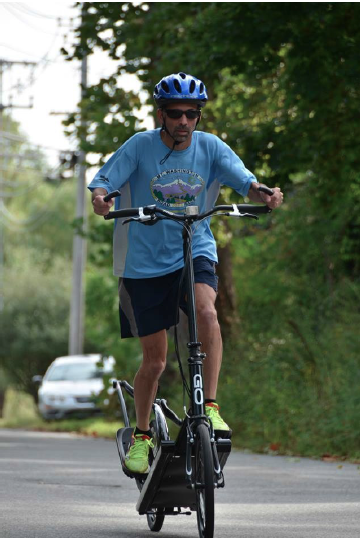 Stationary bike is my “go to” alternative training. I have an excellent old Tunturi bike in my basement which means I can ride any time I want. Having the bike so easily available makes it convenient to just jump on at all hours of the day with weather never being a factor. I also prefer the indoor bike because I can read at the same time. I’ve set up a book stand on the bike and plunked it down in front of the TV/DVD player; that way I can keep distracted during long rides. I’ve also got a road bike and a mountain bike which gets me outside when the mood strikes and the weather is decent.

ElliptiGo is my latest training tool; I just acquired one at the beginning of September. The ElliptiGo (or Go) is a real head turner. It is a cross between a bike and an elliptical trainer. Being able to workout outside is a major attraction of this device that also makes the rider stand out in a crowd. The Go gives a great cardio workout with a motion similar to running but it also works on your core as you have to balance. If you can bike you can ride the Go and the learning curve is short. Within ten days of purchase I was up to doing a 26 mile ride at 15+ miles per hour. What a blast!

Concept 2 rowing machine is a long time alternative I’ve used since back in the late 80’s. The Concept 2 is a great upper body workout and also works your core and legs while having no impact. I have never been able to do more than 15 minutes at any time on this device. The hard plastic seat is very rough on this bony runner’s bum. I like to mix rowing with indoor biking; it breaks up the monotony.

Nordic Track Classic Skier can be a solid workout, again with no impact. I’ve got one but it mostly is just used as a drying rack for my wet biking gear. The few times I used it I found it to be very difficult to put in enough time to get any benefit. It was just too boring.

Elliptical machine is the final item in my workout room, and it is the one I’ve used the least. It is a relatively cheap model which may be why I’ve avoided it, no bells nor whistles make it mind-numbing to use for any length of time. It is good to have as many weapons in your arsenal as possible, so if it came down to it and the elliptical was the best workout for whatever the current injury was I’d use it. I might look more closely at using it more now with the added incentive of keeping “ElliptiGo” fit for racing on the Go in the spring.

I encourage everyone to get out there and always “Be careful out there.” Be especially careful if you are outside biking or Go-ing. It’s been an eye opener to see the number of people out there who aren’t wearing a helmet. Be smart; be safe; live to run another day.

Despite his injuries Dave Dunham has run well over 100,000 miles. This article originally appeared in the Nov/Dec 2013 issue of Level Renner. Get your free subscription today (box in upper right portion of screen).