Apr. 16 Articles, Get Involved no comments

As we announced in our April subscriber newsletter, we will be teaming up with Karhu and the New England Running Company to give away some great stuff at the 2014 Boston Marathon Expo. Kevin and EJN will personally be on hand to meet and greet member of Level Legion (and hopefully to persuade a few more to join the ranks). Here’s a schedule for our appearances:

Here’s what to expect:

That’s right, that’s 9 gift packs and 3 pairs of shoes to be given away! Kevin Balance and EJN will be helping to hand out  prizes and greet the members of Level Legion that venture over to the booth, along with the Karhu Bear. 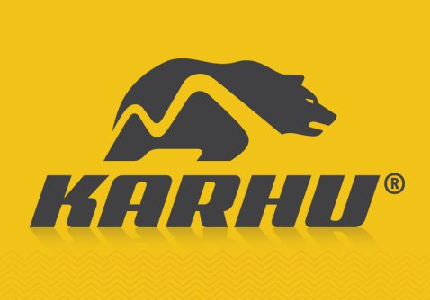 Hump Day Round UP

File this under ‘breaking news‘ and also under ‘terrible news‘. David Goodman got hurt. Per the NE Distance Facebook page we found this tidbit:

Goodman suffered a freak injury that is threatening his outdoor season. He dislocated his elbow in a fall. Wrappings came off on Monday and the doc says it’s healing nicely, but we’ve already had to cancel his opener which was going to be this Friday in Princeton. We’re going to see how he responds to training over the next week and make some last minute calls on the races we were planning – April 13th at the Brown Invite in Providence and the April 28th Peyton Jordan in California. We will keep y’all posted.

We have two theories on this injury:

1.) David incurred this injury in a diving attempt to save Molly Huddle’s life. As a sign of gratitude, Molly joined the NE Distance board of directors.

2.) David had to arm wrestle his teammate/roommate Meaghan Hobson to see who’s turn it was to do the dishes. Although Meaghan won she still had to do the dishes because she hurt him so badly.

In all seriousness, we wish David a speedy recovery and hope he doesn’t miss too much time (if any at all).

On to more positive news…

In case you missed it, we featured the SISU Project in our Club Spotlight section of the latest issue of Level Renner (Mar/Apr 2013, pg 25). When they put out a call looking for blog volunteers to help spread SISU shortly after, yours truly answered the call. The product of our collaboration can be found here, along with other creative blog posts by some names that will be quite familiar to you. Read about my SISU, find your own SISU and help spread SISU by checking out their blog.

At the end of February I was sitting in the RaceMenu office talking with Brendan Kearney about how good of an idea it would be for Bill Rodgers to finally join Twitter. He had been suggesting it to Bill, then I tried helping out with this tweet:

Twitter would be so much cooler if Bill Rodgers was on it.

We put that up a while back and forgot about it…until Bill recently joined Twitter. I’d like to think that’s the tweet that finally pushed him to do it. I know, I know, that’s wishful thinking (to the max). Either way, please join us in welcoming Bill Rodgers to Twitter (and I guess Level Legion too since he’s following us now)!

Big things coming are coming your way soon. We should have interviews up with Tim Ritchie and Hilary Dionne sometime before the marathon. Tim is looking to make a big splash on the scene as he makes his marathon debut. Hopefully the weather is a tad more cooperative this time. Hilary was 15th at Boston last year and also the third American woman. That’s crazy good. Looking forward to hearing what both of them have to say about the 2013 race.

I will also be making an appearance on the radio to talk about the marathon on the The Boston Sports Stamp (AM 1510) show with Victoria Barnaby and the rest of the gang. That should be really fun and a great opportunity to get the word out about the locals who are ready to make some noise on April 15th.

And finally, I just wanted to take a moment to reflect on just how far we have come. Almost a year ago now, Kevin Balance, Joe Navas and myself donned our Level t’s and stormed the marathon expo. The website was still fairly new, we didn’t have much up yet in terms of video footage and our audience was much smaller.

As we made the relentlessly made the rounds (over multiple days) in an effort to network and further the cause, we kept getting asked about Level Legion. Well, not in those terms specifically but more along the lines of ‘how many subscribers?’ and ‘how many Facebook friends?’, etc. At the time we might’ve only had 250 or so friends on Facebook and as proud as we were of that number we soon realized it wasn’t impressing many of our new acquaintances.

We’ll be returning to the expo this year with the same mission and definitely see it as a triumphant return. Our Facebook following has swelled to 1,229 (and counting) and our web traffic is growing at a strong rate. We know there’s still a lot of growth ahead of us, both before the marathon and continuously after, and you can help with that. If you love what we do (even if it’s only a mild ‘appreciation’ to a strong ‘like’), please make it official and help out by: 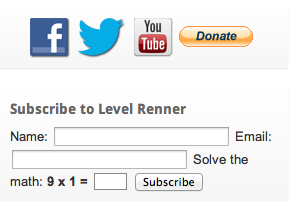 As the image to the right shows, we made it easy for you and have links to most of those options right there on our homepage. Any (or all) of these would be a huge help to us and make us look that much more attractive to the people we meet on Marathon Weekend. All it takes a is a quick click; it’s free, easy and totally non-intrusive. Officially joining the Legion will help us get a better product out to you.

Thanks again for your loyal support and we look forward to covering your races, workouts and stories going forward.