May. 05 Articles, Issues no comments

Run on the ground. Welcome to the May/June issue of the underground. It’s our biggest edition ever at a whopping 48 pages. Enjoy every last one of them and be sure to tell all your friends about it.  We got you covered when it comes to the Boston Marathon but that’s just the tip of the iceberg as lots of our normal features are in this issue too: performance, nutrition, commentary, athlete profiles. As always, the digital copy of the magazine is free, but if you would like to purchase a hard copy you may do so via the hp MagCloud site.  In either medium, get reading! 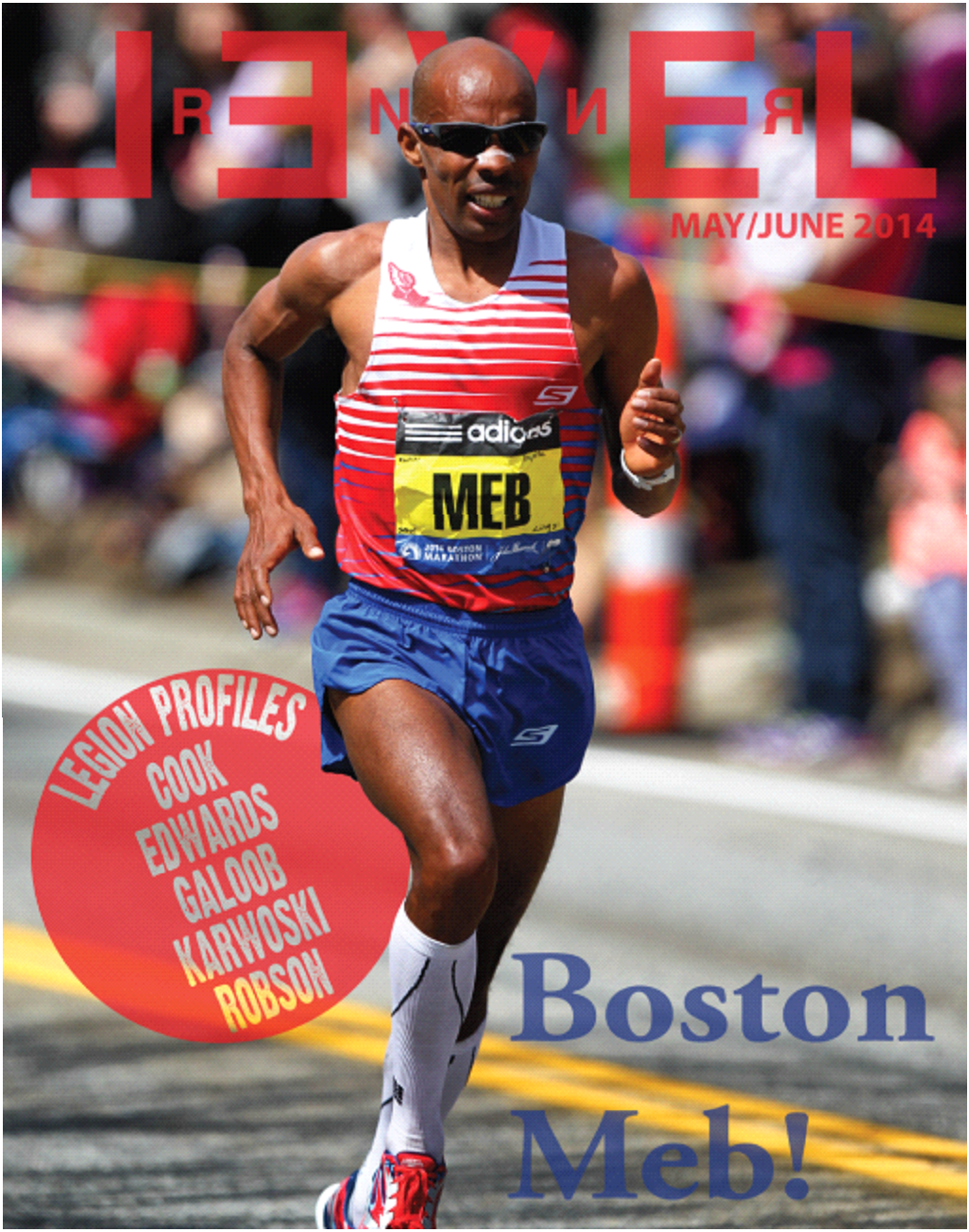 If you like what you see in Level Renner, please consider making a donation to help defray some of our costs.  We suggest donating $1 per issue or $5 for the year.  Thanks in advance for your generosity.  Click here to donate.
Tags: adjusting, Boston Marathon, denise robson, eulogy, if you map it, Issue 20 May/Jun 2014, kale, katie edwards, masters, Mike Galoob, mountain series, nancy cook, Nick Karwoski, sally kiebdaj, tnt

This raw race footage from New Bedford comes from mile 12.7. Or is it 12.8? 12.9? How about we call it Mile 12.McDonald’s, mainly because I was standing right across the street from McDonald’s. For the most part it’s just the feed from that spot, but I worked in extended finish clips of the top two men (Ruben Sança and Nick Karwoski) and women’s champ Kim Smith.

Raw footage from the New Bedford Half Marathon. This video shows the start and then a good amount of the field coming through Mile 5. Leaders at this point were Ruben Sança (the eventual winner) and Nick Karwoski, who both run for the Whirlaway Racing Team.

Sarah Prescott of the Whirlaway Racing Team ran the New Bedford Half Marathon on Saturday. For Sarah it was her 100th consecutive USATF-NE Grand Prix road race, a streak that has taken her 14 years to accomplish.

Stepping in to help interview her is Whirlaway teammate Nick Karwoski.

Nick Karwoski of the Whirlaway Racing Team ran a solid half marathon debut in New Bedford on Sunday. The New Bedford Half Marathon was the second race in the USATF-NE Grand Prix for 2014. Nick’s 1:06:09 was good for second place, behind teammate (and Olympian) Ruben Sança.

Interview by Jim Dandeneau, with some additional footage courtesy of Mike Giberti. Be sure to check out Scott Mason Photo for pics from the race (including the main page feature shot of this one).
Tags: Jim Dandeneau, New Bedford Half Marathon, Nick Karwoski, Whirlaway

As I drove home from work Thursday night, I could see my cell phone in its mount continuously lighting up. Uh oh, something big must be happening. Rupp was in town to make a run at the American indoor 5k record at BU. I was there last year when Rupp nearly broke the American mile record, and was pissed I was missing this attempt. Not only was able to witness a great race followed by an impressive workout in 2013, but I also had the chance to photobomb my own picture with a few legends (you read that right). None of that would be happening this time.

On the track tonight was Rupp, along with Sam Chelanga and Cam Levins. Cam was going for the Canadian national record. Not to be forgotten was Ruben Sança, who was looking to take down his own Cape Verdean national record. A couple of national records were at stake and the right ingredients were in place for it: a loud crowd, a fast track and people to run with. 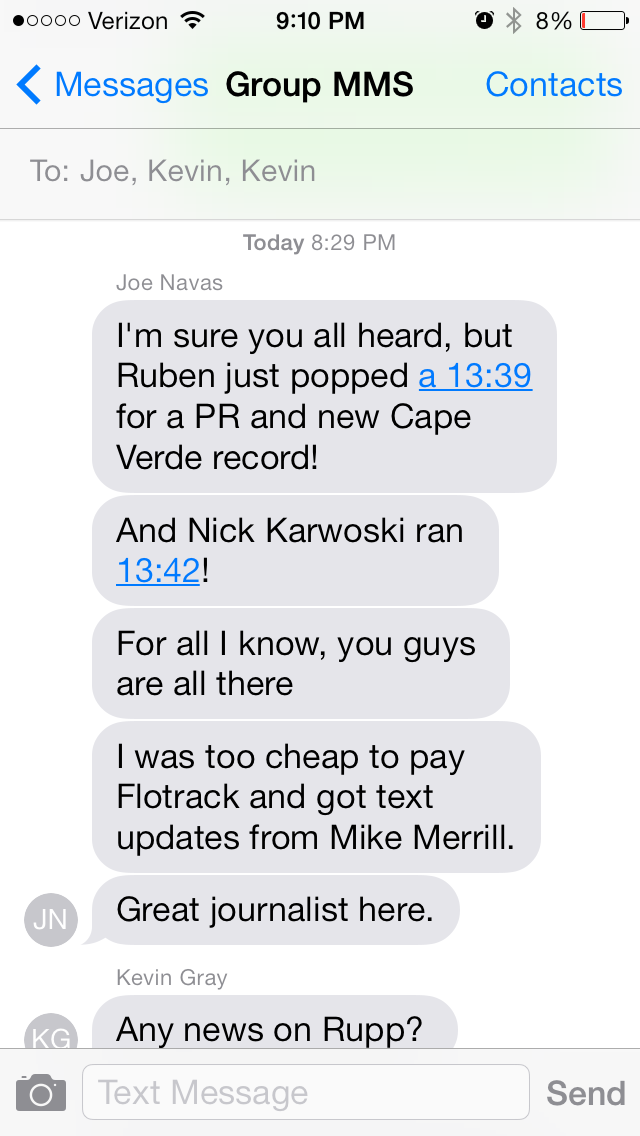 For various reasons, none of the Level Brain Trust could be there but we have our ways of getting remote updates. Joe Navas was getting texts from Mike Merrill and relaying them to the rest of us. I was excited when I saw the news pop up but, being the safe driver that I am, I couldn’t even respond.

Sure, it’d be better to actually be there, but Joe sums it up nicely with his texts about being cheap and great journalism. It brings a special character to what we do. We’ll get by the best we can with what we have to work with, even if it is just off the cuff screen shots and rough video. It’s the underground, baby!

Joe and I are on Whirlaway along with both Ruben Sança and Nick Karwoski. I was happy when I saw their results, but also shocked. Their times were so fast that I had trouble processing them. I’m not trying to say that I had some special foresight and knew the times were off, not at all. It was more like ‘Holy shit my two Whirlaway teammates are running sub 13:45 indoors?! Are you kidding me? I need to step up my game!’ 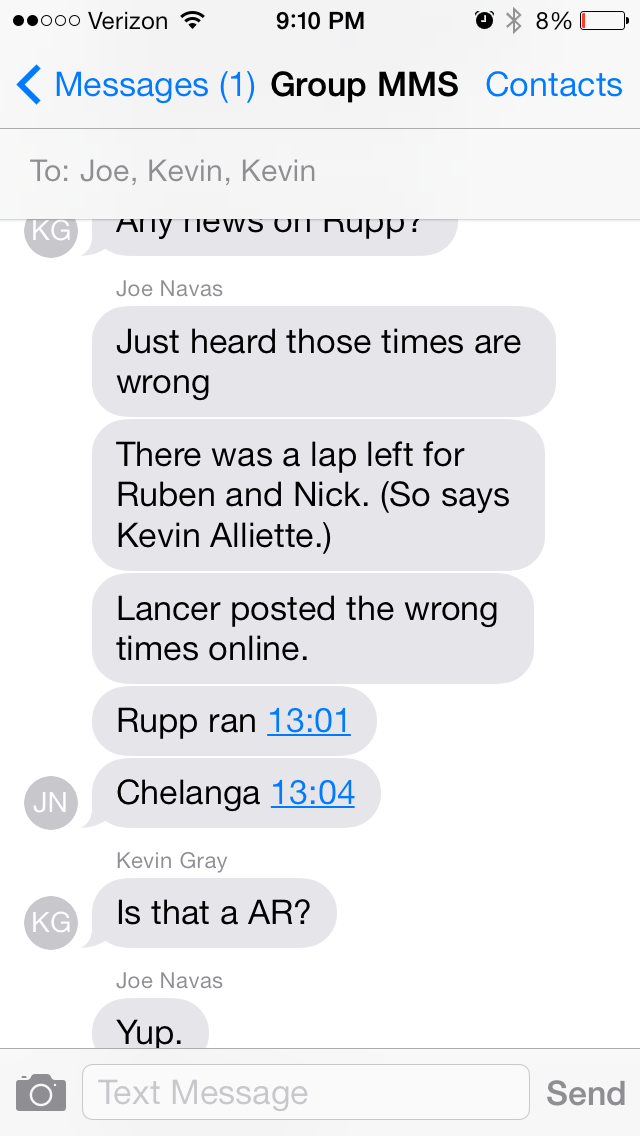 But sadly there was an error in the results and in this day of instant information it spread pretty quickly. With all that going on, the 8% battery life on my phone slipped my mind.

When the dust settled, Ruben did not lower his national record of 13:56. Instead he ran a still very fast 14:14.79. Right on his heels was Nick in 14:17.80. Wow. The grand prix series will be pretty competitive this year if these guys can keep that up! Too bad they had to calm the fervor a bit post race, but it’s not like anybody’s going to be disappointed in those times.

The results have since been updated, but it might take some time for everybody to see that the initial ones were not accurate.

Up front, Rupp, Chelanga and Levins were out in their own world. As has already been widely reported (and seen live by many of you), Levins ended up getting a new Canadian record of 13:19.16 and Rupp set a new high water mark for Americans with his 13:01.26. In the aftermath of Rupp’s new AR it’s easy to overlook the fact that Sam Chelanga also went well under Lopez Lomong’s old AR of 13:07. Chelanga ran a 13:04.35 and looked very strong the whole way. 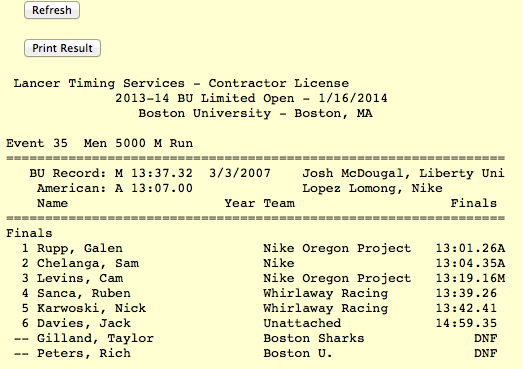 This ended up being one heck of a results tease.

Thanks again to Mike Giberti, we have video of the race available for all to see here: 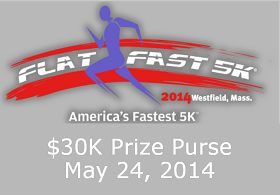 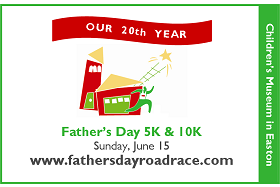