Side by Side Profile: Dave & DJ Principe

This article originally appeared in our Jan/Feb 2015 magazine issue.

Dave and DJ Principe are becoming a well-known father-son duo in Rhode Island these days.  Dave and I are both members of the Tuesday Night Turtles, and, as a result, we have logged thousands of miles together over the last fifteen years. In this time I have been lucky enough to have a front row seat to watch the development of DJ’s running career, one that has bloomed since starting high school last year.

Despite dad’s avid running, DJ was never pushed into the sport. Growing up, he tried lots of different things (basketball, baseball, karate), but he was ultimately drawn to running. Perhaps when a son has a father who is as dedicated as Dave is to the sport, the son gravitates to that sport as well. Whether it was the group runs at Big River or the snowshoe races in New Hampshire, DJ was always by Dave’s side and the love of running grew stronger and stronger. DJ was receiving a great education on those runs and doing his first ten milers with the Turtles surely helped too.

While DJ has just started to tap into his potential (already a state champion as a sophomore), Dave has been putting in the miles for years.  I recently sat down with the two of them to ask a few questions about goals, motivation, and all things running.

How did you start running?

Dave: I was a decent middle school and high school runner but gave up racing and training for sixteen years after high school.  I would run occasionally in the summers, but was more into the gym in my twenties.  In the summer of 2000 after I took an office job and the kids had been born, I had gained just over twenty pounds and was not happy about it.  I decided I was going to start running again to drop the weight.  It only took a few weeks to drop most of the weight and then after a few months I felt pretty good and wanted to run a 5k.  After that running has simply become part of my life and is something I do pretty much every day.

DJ: I started running at local kids races around the state at 5k’s my dad would do. I started running because at the time it was just another sport. I wanted to try just about anything and while I was already at the races, I figured I might as well run too.

What motivates you to keep getting in the miles?

Dave: I have always been a competitive person and running gives me the opportunity to fulfill that need.  Running also gives me a chance to clear my head from the stress of the day.  I often say the best part of my day is when I am out beating myself up running!  Running keeps me healthy so I can enjoy an active lifestyle as I get older.

DJ: Right now it’s for my team. I see all of my teammates working hard and it motivates me to keep going. I think about how I feel when they work and hope if I work even harder they will be motivated to take it up a notch too.

Now, let’s go over some of your favorites, starting with races…

Dave: Race mornings I have a small coffee early, Gatorade, Powerbar and/or Bagel with peanut butter.  Pasta the night before.

DJ: Powerbar and Gatorade, Chomps, and lots of stretching. I don’t like sitting around.

DJ: I love to wakeboard, play some pick-up basketball or football with the team, and I try and golf as much as I can over the summer with my grandparents.

I also asked Dave and DJ about their PRs and what a typical training week looks like for the two of them. See the charts within to get all these details about the Principes.

Bob Jackman runs for the Tuesday Night Turtles and now writes for the LVL.

Nutrition During the Marathon Taper 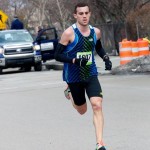