Those Kinds of Goals

This article originally appeared in the Jan/Feb 2015 edition of our magazine.  As we enter the last quarter of 2015, we thought it would be a good time to check in on our goals for the year.

Have you already set your 2015 goals? You know, the ones that really matter: yearly mileage, race times, vDOT level. Of course you have, you’re a renner and we do two things consistently: run and set goals centered on times and training volume. Numbers help establish goals. Numbers help us achieve our goals. Numbers are our goals. But should we have other goals that are not centered around numerary aspirations? Lest we become slaves to arbitrary ordinals, shouldn’t there be more? Fitness is paramount but the real focus of all running is supposed to be fun!

With regards to our goals for 2015, perhaps we should design a separate set of objectives. We do it with race plans (i.e. A goal, B goal, etc.), so why not do it for annual planning? For these other aspirations, maybe there should be a paradigm shift. If it comes from or is meant to be input into a table of figures or is configured around minutes and seconds, then it cannot fall under the umbrella of those other goals for the new year. Attempt to make these separate targets as far removed from “normal” data as you can. I guarantee that you will achieve running nirvana at some point because whether you succeed or fail, you’ll have a helluva lot of fun simply by creating and trying! We have to put in the miles anyway, we might as well make them interesting.

All plans start with just that—planning. It may be best for us to spend some time searching out quirky, whimsical, or idiosyncratic goals. Renners epitomize these characteristics anyway so why not embrace them? Set a goal that allows you to reach a PR that is slightly off the beaten path, so to speak. For example, our own LVL Legion member, Dave Dunham is currently immersed in a quest to not only run in every single town in the state of New Hampshire but also bag every highpoint there as well. What does he “get” for doing this? Nothing…except a shaded-in map, tales of greatness, and, chances are, a big smile. If you’re asking yourself why would someone do this, then shame on you! You’re a renner—ask yourself why not? I’ve embarked on a similar albeit much less daunting task of running every road in my very rural hometown. At press time, I’m currently seven roads away, with the only thing to show for my efforts being a marked up map, some strange tales to share, and copious “LOLs” at myself. Well, maybe I’ll buy a plastic champion belt (think Rocky) when I reach my goal but that’s just me.

Another fellow LVL member, and current Masters division beast, Mike Galoob is perhaps one of the quirkiest when it comes to planning those other types of goals. Several years ago, he invited a small group of us to run from the lowest point in Rhode Island (sea level) to its highest point (Jerimoth Hill at 800’). Although paltry in the elevation vector, the idea of running from “Sea To Summit” in a state is rather on the level. Think of it as a reverse Reach The Beach, without the relay team. Again, this is a meaningless goal that is not recorded anywhere except in running logs, hearts, and minds; we do these runs for the thing itself.

Feel free to go off road yourself. You don’t have to gorge on rugged mountainous terrain to the extent that Adam Wilcox does. Shorter and stranger, can be just as memorable. If you’ve never heard of hashing or the Hash House Harriers, you need to familiarize yourself with this underground phenomenon.   Envision groups of silly runners deceitfully laying trails through forests in attempts to trick their brethren, only to meet up at a rendezvous point to drink beer heartily and sing loud, offensive songs. Perhaps you could invent your own variation of this childish debauchery with your own friends, training partners, or running club. Scavenger hunts were great fun when you were younger so why stop now? A scavenger hunt plus running plus trails plus friends sounds like an enticing equation for excitement, doesn’t it? I doubt that your pals (running pals that is) would be opposed to meeting at a trailhead to engage in a wooded scavenger hunt, orienteering, map reading, and muddy sufferfest. Granted, the concept of orienteering and running around wooded hillsides is certainly nothing new but we runners are not always in pursuit of new. We just want fun.

‘Tis the New Year. If you stick to simply number goals realize that you might be limiting yourself to the world of numerical data. Why not open yourself up to non-Euclidean principles? Somebody, somewhere, at sometime is going to crush your numbers, yet nobody can steal your abstract accomplishments that begin with “Hey, remember that time we…”

No matter what other goals you decide for yourself this year, stick with them. We can all agree that to keep ourselves focused on fitness, serious running goals are a must. Just don’t forget about those other running goals too.

Muddy is curious about your goals. Let him know on Twitter @muddypuddin #thoseothergoals. 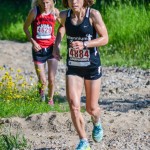