Fox 25 news on the scene in Foxboro yesterday for the Old Fashioned races.  With cameras rolling, they still couldn’t give people the obvious: race results. WTF, Fox? They were there to cover the charity angle of the race so that was the focus of the segment. But why must they overlook the fact that it was a race and not a fundraising parade? When it comes to the subject of racing, isn’t the most obvious question ‘who won‘? It’s almost as if they think that their viewers would rather not hear about the competitive angle of it.

It’s a little sad that they would be on the scene and not pay any attention to the race itself. I guess that’s where we come into play. If the mainstream media reported on local races then there wouldn’t be a need for us. So we’ll pick up their slack.

The race is called the Old Fashioned Ten Miler and Flat 5K. But, in the results there is only a ~5 miler and a 5k.  After doing a little investigation, the course was altered due to Saturday’s snowstorm. No, an old fashioned 10 mile race isn’t actually only 5 miles, although people did seem to run faster in the good ole days. You really have to feel for the race directors on this one as this is the second year in a row that the race has been severely impacted by a winter storm.  This classic New England race deserves better luck than that.

In the 5 mile race, it was the Moultons sweeping the top spots. Pat and his wife Katie both won. Pat ran a 27:59 and Katie ran a 31:43, both winning easily. Katie actually finished 6th overall, too. That is one fast couple. There were over 400 people in the race too, so it wasn’t exactly a small field.

In the 5k race, David Seybert ran an 18:28 and effectively ran away with the race. Elizabeth Edwards was the women’s winner and she impressively came in 4th overall. That was also a decent sized field (170+ runners).

Maybe if the Moulton’s were wearing cupid underwear they would’ve earned the right to be on the Fox broadcast. I guess that’s what it takes these days for a running event to get any attention. 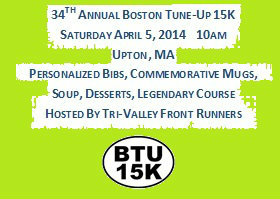