Racing in the Moonlight

The Kingman Farm Moonlight Snowshoe Race was held on Saturday night in Madbury, NH. The race was supposed to be under the moonlight, but the clouds rolled in and dumped some more snow on the region. No worries here since snow is a key ingredient in a snowshoe race. Nacho Hernando won yet another one, this time covering the 4.5 mi course in 33:32. Dangergirl Kristina Folcik-Welts regained her winning form and took the women’s title in 41:13. Kristina was also 13th overall in the field of 105 runners.

Nacho didn’t run away with this one. He narrowly beat Jim Johnson, who ran a 33:45. This is the race from JJ’s perspective. Included in Jim’s original blog post was a cool shot from Scott Mason Photo (check out the rest of his work from that race) and a video of the start from SNAPacidotic. Here is Jim’s story:

February 15 (Saturday) – 15 miles total.    6 miles in the a.m. from the East Madison, NH field office of the USATF Mountain Team (Paul Kirsch’s house).  Ran w/ Paul, Sarah Hernandez, and Leslie Beckwith.  Easy jaunt to test out the calf on the snowmobile trails before the race in Madbury later in the day. Got a workout in, trying to push Leslie’s useless-as-sh*t-in-the-snow car out of Paul’s driveway (which was plowed, yet her car still wouldn’t move).

Then headed down later on (in the beginnings of snowstorm) to the Kingman Farm Moonlight Snowshoe Race in Madbury, NH.  The roads were super slick by the time I got off 16 in Dover.  Met up with Steve Dowsett at the town hall in Madbury for a  2.5 mile warmup on the dark, snowy roads.  Two miles on the roads and then got back and threw on the snowshoes for another half mile of warming up before the start.  I knew it was going to be a good race with a surging Bob Jackman, Steve, Jim Pawlicki, and Nacho Hernando in attendance.  I was just hoping my calf stayed with me during this one.  The last time I had pushed off with any sort of power was on Thursday and it was right when the massive cramp bit me at the end of that run.  That was still very fresh in my mind.  The course was lengthened by almost a mile and a half (to 4.5 miles exactly) this year and the conditions were great.  Lots of snow and a good mix of single track and trampled down double track + the same climbing and single track switchbacks that have been part of this race in the past.  The field section in the middle was far longer and probably the highlight of the race.  Couple all that with the usual excitement and uniqueness of racing in the woods in the pitch dark (and in a snowstorm) and it was really building up to be an awesome event. 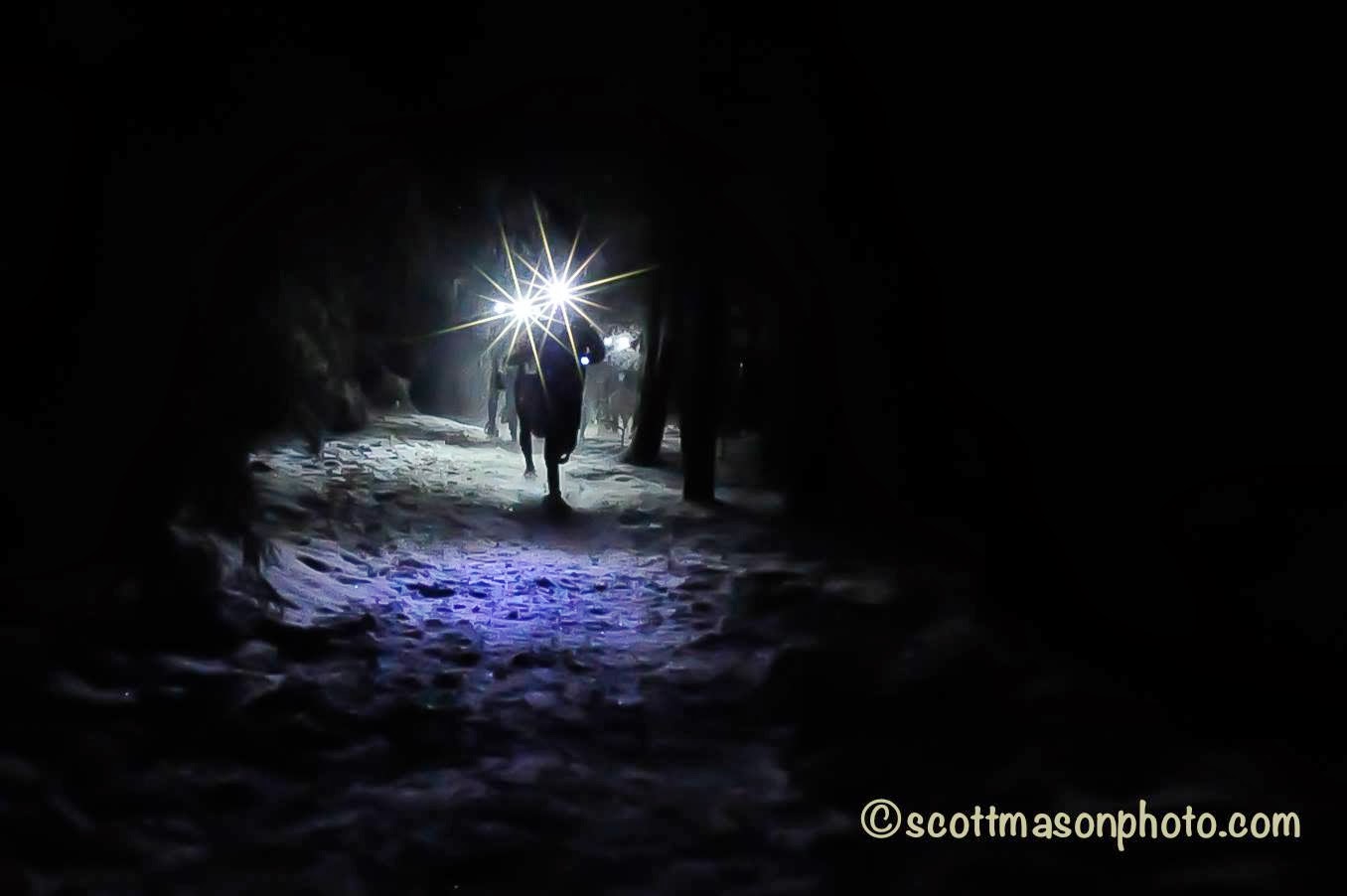 Chris Dunn gave the word and we were off with yours truly in the front again for the early stages.  It didn’t take long (about 2 minutes) for my calf to twinge at almost the same intensity I had on Thursday.  If it wasn’t a race, I would have stopped dead in my tracks and that would have been it.  But I pushed on and it came back every minute or so.  I actually found myself yelling out load a couple times right before the first mile when it would pop on me and it was really intense. Nacho actually asked me if I was ok when he heard me yell the last time.  He was right on my heels.   It made me have to back down a bit and all I became focused on was my calf and having to possibly drop out.  Right after the first mile of twisty, turning (and SNOWY) single track, Nacho moved on around me in the same type of signature definitive move I am becoming accustomed to (unfortunately).  He moved on ahead and pushed on up and down through some awesome narrow single track in the woods.  There was a ton of snow pushing the pine branches down onto the track, making you have to constantly duck underneath and brush up against some, getting you soaked each time.  One of the times my headlamp almost came off and pushed up way high on my head.  I immediately couldn’t see and got nervous for a second that it had come open and I would lose the batteries.  After fiddling with the strap and adjusting myself quickly, I pushed on, trying to keep Nacho in sight the whole time.  The race is so cool because no matter how far ahead or back people are, it is so dark in the woods with absolutely zero external light from any other source, that you can see the other racer’s headlamp light a lot of the way.  Before dumping out onto the field, I started to notice that we had enough distance up on the rest of the pack, that I could no longer see headlamps behind me.  I think last year, I never lost sight of Bob’s light.  This year, I think we were running pretty well as we lost the pack quite early.

As we hit the field section, I would seem to catch back up to Nacho just a little and make some good progress.  But then as quick as I thought he might be tiring and I might catch up, I would seemingly fall back again.  After about 7 or 8 minutes of no calf issues, I got whacked again with a massive cramp during the middle of the field.  It was all I was really thinking about at that point.  Just trying to finish now.  The field is great because you can look across after all the meandering back and forth in the single track that had been blazed already, and see the other racers lights all in a row.  You couldn’t make out much of anything else. It really is something very unique in racing (especially in snowshoe racing).  By seeing the lights now all bobbing around on the field, you can start to judge approximately how far back they are.  I continued to follow Nacho’s lead as he navigated the twists and turns of the single track across the field (making my job easier).  There hardly needed to be any flags (which were hard enough to see in the dark anyways) in this section because the only way you could really go was in the single track path that was trampled down.  If you wandered from that track, you were probably going to be in knee deep snow.  I got to also see Steve Dowsett in 3rd and how close he was (and whoever was behind him at that point).  The only reason I could tell it was Steve back in third was because of his headlamp having a red light in the back.  You couldn’t make out who was who, but he was the only one I knew that had that red light on.  It was kind of like a target for whoever was behind him.  I would have turned that off for sure :).

We exited the field finally after a great section of the race course, and hit double track ski trail for a good while.  Nacho appeared to have me by quite a bit here but I could still see his light illuminating the snow and trail up ahead.  Pretty soon we were back on a familiar section of the climb back up to the final hill.  I seemed to make up a little ground here, but still had to put up with the occasional calf cramp that just made me want to continue the status quo and finish the race in at least second (and hold off the rest of the talented field).  The switchback climb came and it wasn’t anywhere near as bad as I remembered.  The climb actually didn’t bother my calf as much as the faster, flatter sections.  I hit the top of the climb finally, and even though I could see Nacho’s headlamp on some of the switchback sections, he still seemed to have a lot of ground on me.  When I hit the very top, I ran by a couple of people who were cheering us on (but you couldn’t see anyone it was still so dark).  One of them said to me that Nacho had about 20 something seconds on me.  It seemed like Nacho was further up on me than that, but I was thinking the climb hurt him a bit so I actually started to push despite the calf looming.    The descent at first is a cruel joke because you start climbing back up after just a short push down.  You end up coming back up the other side of the hill in the other direction and it really kicks you in the butt if you are new to the course (because you are expecting to drop down and lose all the elevation at that point).  I was familiar with this and knew I had to climb again.  I pushed up the climb and noticed Nacho pretty close on one of the first switchbacks down.  I think at that point I had cut his lead in half in just that short amount of time.  He noticed me for sure and I figured I was less than 10 second back almost out of nowhere.  I thought at that point he was hurting and I may actually get him. For the entire way down, I was expecting to roll up on him and replay the finish from the only other time I lost this race… But being the tough competitor that he is, he pushed down the last tricky and narrow descent to the flat section of course near the end (where I was unable to get around Kevin a couple years ago).  I hit that section and saw him now just a bit too far ahead to catch. I took the last turn and went up on my toes one last time to push to the line and my calf cramped up 100% almost knocking me to a halt (but within sight of the finish clock).  I stiff legged it in and finished 13 seconds behind Nacho for what I am considering a great run despite my calf issues.

I really was happy with my race. I think my speed is obviously lacking right now due to zero workouts, but my actually cardio is starting to come around. The more I race, the more my legs will start to come around as well.   Nacho seemed gassed and just glad to have won.  He actually had apparently eaten only 1 hour before the race so his stomach was upset.  I felt great but had my leg to deal with.  It felt immediately fine after I finished and felt fine on the 2 mile (slow) cooldown w/ Dowsett, Pawlicki, and Jackman who all finished 3-4-5 respectfully.  The more I talk to Nacho the more I realize how cool of a guy he is and he’s a graceful winner for sure.  He’s really coming around w/ the snowshoeing now and I think he’s going to have a great Nationals for sure.  He seems pretty excited about it.  I just hope to be able to stay close to him in any other races this season.  If I do, I know I’ll run pretty well.

The ride home was horrendous.  It took me over 2 hours and I don’t think I ever went over 40mph even on 16N.  The roads were not plowed and there was just a single set of tire tracks that everyone was using.  There was one car deep off the road and I only saw 1 plow for about 1 exit before it got back off the highway.

Cool video of the start of the race:

Follow all of JJ’s training and racing on his blog: DoubleJRunning.